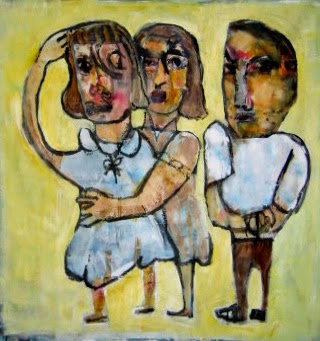 the Seroquel.makes my mouth swollen,my throat swell up.
whats Seroquel ?.its  basically Haldol .thorazine...with a fancy name
supposed to get rid of  da' voices .da' sound and vision.,,,
the dr.is perplexed ,,,,he keeps switching the scripts.upping
the dose...this has been going on for a year now.when I explain the swelling
the doc says it's my body  acquainting itself .to the meds. acquainting ? itself
for more than a year?the tightening of my throat ...the stiffness of
my back .my limbs.. he says is a very mild case of what he calls tardive
dyskinesia......................................but the sound.
the visions
I ask.aren't
the meds supposed to

get rid of them? the hallucinations? I ask...because they don't
and the dr . says "well you yourself
said that Sound and Vision was not a thought disorder-so why would they?
than why ,I ask am I taking the Risperdal and Seroquel
than...and this tardive dyskesa...and my mouth and throat swelling
up and feeling so tired..I can barely move.
the doctor says he spoke to a colleague
who
once dealt with a client
"dr.please don't call me a client.
call me a patient.."
he says OK...
and says.                                                      "I spoke to a colleague of mine
who had once dealt with a Targeted Individual
the client...I mean patient of his...had symptoms
quite similar to yours...sound and vision..and all that
you describe ,including "run-ins" with "Mobbing,Gas
Light 'Street theater" enactments  also that the patient
had begun recalling incidents from his childhood
that indicated Ritualized Abuse aspects of what is referred to as a Programming based
parenting ...based on Imprints. And symbols
and reinforced B.F Skinner like ...conditioning
based to understand if CUES based on condition
response ,for instand if a rat heard a dial tone
a food pellet would in the food slot
in the rat's cage.                                           attempts were made to induce the sound of the Trigger
(dial tone) being introduced into the lab rat's brain not
by SOUND but by Silent Sound,,the ,Frey Effect and latter
and tests were done by introducing pulsations ,beams into the rat's visual cortex a trigger of IMAGE to synchronize the lab rat's induced SIGHT to cause the rat to associate
a specific induced IMAGE with pellet being in food slot

I sit there,zoning out..and ask the Dr. what this has to do with him giving pills that don't make MY induced sound and vision GO AWAY!.
and the doctor explains.
that eventually the research team used a beam to essentially eradicate portions of the lab rat's amygdala to disrupt the rat's brain signals...to piece to gether  based response to either induced sound or vision on their cortex to observe if the rat would or could eat  pellet without being broadcast that the food pellet was in the slot.

"actually so much of the lab rat's mind was inadvertently destroyed by the directed energy to it's brain ...the rat seemed to not care if it ate or not...Now the Seroquel ,Haldo etc...are .essentially doing that same thing  to parts of your mind...so you might still hear and see induced Sound and Image but not be CUES the Sound and Image,,"