This is an initial summary report of a project taking a new and systematic approach to improving the intellectual effectiveness of the individual human being. A detailed conceptual framework explores the nature of the system composed of the individual and the tools, concepts, and methods that match his basic capabilities to his problems. One of the tools that shows the greatest immediate promise is the computer, when it can be harnessed for direct on-line assistance,.A Direct Neural Interface

By "augmenting human intellect" we mean increasing the capability of a man to approach a complex problem situation, to gain comprehension to suit his particular needs, and to derive solutions to problems. Increased capability in this respect is taken to mean a mixture of the following: more-rapid comprehension, better comprehension, the possibility of gaining a useful degree of comprehension in a situation that previously was too complex, speedier solutions, better solutions, and the possibility of finding solutions to problems that before seemed insoluble.. We do not speak of isolated clever tricks that help in particular situations. We refer to a way of life in an integrated domain where hunches, cut-and-try, intangibles, and the human "feel for a situation" usefully coexist with powerful concepts, streamlined terminology and notation, sophisticated methods, and high-powered electronic aids.
Augmenting man's intellect, in the sense defined above, would warrant full pursuit by an enlightened society if there could be shown a reasonable approach and some plausible benefits.
This report covers the first phase of a program aimed at developing means to augment the human intellect. These "means" can include many things -- all of which appear to be but extensions of means developed and used in the past to help man apply his native sensory, mental, and motor capabilities -- and we consider the whole system of a human and his augmentation means as a proper field of search for practical possibilities. It is a very important system to our society, and like most systems its performance can best be improved by considering the whole as a set of interacting components rather than by considering the components in isolation.
This kind of system approach to human intellectual effectiveness does not find a ready-made conceptual framework such as exists for established disciplines. Before a research program can be designed to pursue such an approach intelligently, so that practical benefits might be derived within a reasonable time while also producing results of long range significance, a conceptual framework must be searched out -- a framework that provides orientation as to the important factors of the system, the relationships among these factors, the types of change among the system factors that offer likely improvements in performance, and the sort of research goals and methodology that seem promising.1
In the first (search) phase of our program we have developed a conceptual framework that seems satisfactory for the current needs of designing a research phase. Section II contains the essence of this framework as derived from several different ways of looking at the system made up of a human and his intellect-augmentation means. 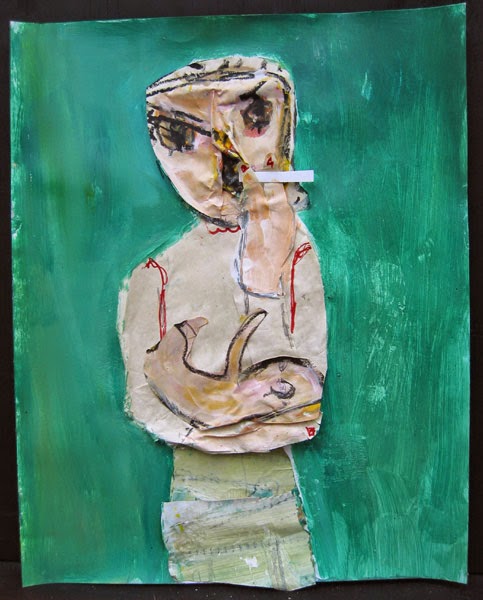 The process of developing this conceptual framework brought out a number of significant realizations: that the intellectual effectiveness exercised today by a given human has little likelihood of being intelligence limited -- that there are dozens of disciplines in engineering, mathematics, and the social, life, and physical sciences that can contribute improvements to the system of intellect-augmentation means; that any one such improvement can be expected to trigger a chain of coordinating improvements.

2015
Evan has taken me over
and lately I do less and less to
'take him on"
when Proxy Cyber does an Over-Ride on you instead of just an Overlap
it's total Immsersion...
not just Mind to Mind Interface

can ya' see what I see...can ya' understand
I don't "think shoe" when I put on my shoe as I might if it were the first time I was putting on a shoe...
like by that I mean I do not interface "I am placing the sneaker on my floor covered with a sock and now lacing....just like Obviously I do not pause and THINK to myself ,let alone my Mandler..
I am turning a door knob now..left now right left now right ...
a lot of the tough work with brain computer interface is on THEIR side of the tether...separating TV sounds ,radio....from thought
they kind of "run" on different signals
anyway
but not always
did you know after only 10 seconds or so your beta  and theta wave changes to some state ...when one focuses on tv...
mainly they like understanding how one's own thoughts...mingle with action on tv....
in a place in one's mind that deals with self referencing ..pertaining to
"putting oneself" into the narrartive or charter on TV
as this is just one small step for man to machine Gaming with Virtual Reality and Merge Insertives..

and like being in a dream...even if you can't recall it afterward
you are YOU in the dream even in a different Visage than might be your own but you know YOU are YOU anyway...
Maybe the only REAL part of YOU that is YOU at all
is this part that KNOWS

In this case in that cab when the Merge bionano allows your Tele-Presence
to go Full Over Ride
you can experience a Heighten-ed Reality you can't have with just Direct Neural interface
Posted by vvvvv at 9:08 AM