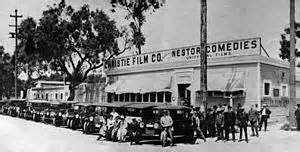 Al Christie began his career in 1909 working for Nestor film company in Bayonne, New Jersey. In 1910, at Horsley's Centaur Film Company
In 1911 Christie Al went to the West Coast to head up Nestor Studios. This operation was the first ever movie studio to be built in Hollywood Al began turning out one single reel of a Mutt and Jeff comedy picture every week.
Mutt is  horse-race gambler who is motivated by greed....wanting  another type of sport to play Mutt finds himself  Jeff, an inmate of an insane asylum he can "play games with".

.Al Christie  formed a partnership with his brother Charles to form Christie Film Company which lasted until 1933 when the company went into receivership.