I feel somewhat safe....feel quite a bit of nothing...at all...but cold in my hospital gown waiting for the Staff Psychiatrist to sign the paper that will take me to the 8th floor. 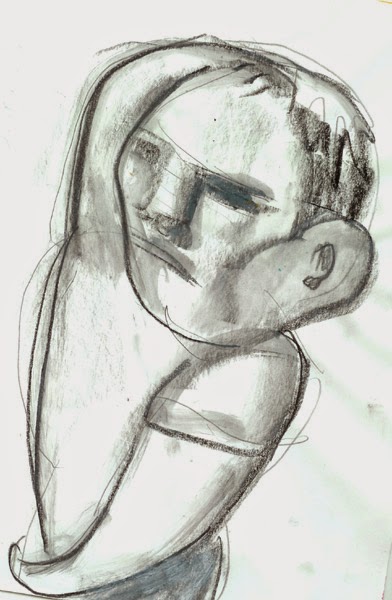 it took an awful lot of prep work to get this far...to make myself not only look but radiate
both the primary and secondary symptoms of schizophrenia
or that is what I hope
I am careful to not pat myself on the back for the efforts it took to help
sway the Dr. to "not ask too many questions" as a "sense of slapping oneself on the back..of "arrogance or conceit "is not at all in the list of observed physical characteristics I must present
effectively in the next few minutes to the Dr. who will
seal my fate ...concerning my being kep on as a Proxy for Merge Proxy Cyber
To help speed the process along
I did what was "in the manual" by rote concerning giving my self a "gave himself haircut"(check)
visibly loco in it's operendi(more so operator of  the hands and perception of the "Giver" of such "Visage"
(the women ,who do what they must to go another few years as Proxy ,have it easier than men ,in my mumble opinion dolling themselves up to be characterized as Certifiable...according to the manual all one needs to do is apply a circle ,literally a circle of rough to their cheeks and wear sweater or sweatshirt with a religious theme ...or logo...folded hands...even a T-shirt from some church bakes ale(got from a  thrift shop or not) over a sweatshirt...)
As writ in the manual I run a hair trimmer only over half of my pate
and only over half of my mustache, which I had spent quite some time defining as to make the "halfness" of it more pronounced

mistakenly I also ,(using a sharpie) draw and upside down cross on my forehead
although in retrospect(reading the dos and don't of a guaranteed commitment/alibi  )
I see the upside down cross on forehead is not in my demographic as "costuming " oneself to "appear"
righteously "mad" enough to be temporarily committed

(you did it on purpose Dumbo...you're not a team player...you deliberately wanted to send up red flags-Evan graphs...,watching through my eyes me speciously trying to get rid of the sharpie upside down cross smack dab in the middle of my forehead
I take the clippers and begin to run them over my eyebrows )

"No way Dumbo....Too Bob Gelodoff/ 'The Wall" for your demographic.
besides that Emblematic is for a rush job to guarantee entry by either a male or female..youi're not quite worth losing our Main Method over..not anymore...but we can do this for ya" ,Evan Impart
and I feel pins and needles around what My Team said is the region in my skull that houses the pituitary gland..
I wait for the Moonface "look" that comes from the Directed Energy
and look nasty ,nasty ,nasty
and graph "can I please just fix the little upside down cross,part of Tru Christie'smentoring focuses now on finishing what one stated"
"oh ok..," Evan Imparts, graphing  me ...I must get away from the mirro as "how's he gonna be able to fiddle about with me sexually after "SEEING " me like this for too much longer..
"Wait he says....the half shaved mustached
was discontinued..
his graph..the slowness of it...makes me assume he's taken to wearing reading glasses
"It says ,,,Mealy Mouth. works"
"Whats mealy mouth? I graph careful not to look in the mirror
",,,It....says///you eat an egg or some toast an make sure but of the food stay suck in the crevice of you mouth.."
"Hmmm.I wondered what mealy mouth meant"I think and therefore graph
"I don't care if YOU KNOW the definition for MEALY MOUTH...you have to somehow do MEALY MOUTH...go eat something ...to get mealy mouth..."

Jeeezzzus," I think can't I just cut off one my ears dude,"
attainment mealy mouth after eat some cracker and Tahini
I notice some of the Tahini dripped on my shirt
and make a move (which Evan reads via our BCI Pre Neural Intent

"no,,,no,,,the Tahini on t shirt might just make up for that stupid thing you drew on your forehead"
The fact that
no cab will stop for is according EVAN is a good sign
but I can't be seen shivering entering the ER
as they might "take that" as one who is "playing loony" for" three hots and a cot"

(2)
one has to make concessions such as psychiatric hospitalization
or one stops being a viable Husk for Human Testing
and the perks of being 'driven" by beams and dreams of Mandler by way of the Merge Bio/Techno they dosed up your "Tiger Blood" with...
I had done all I could to establish my Transient,delerect ,junkie /alkie nature in the neighborhood  to addendum whatever trobles I had masking the primary symptoms of Schizophrenia (hearing and seeing things no one else did...and the unfortunate turn of the head...widening of the eye...and reactions  facial mucle wise to that which has been transmitted upon one's Merge
Not so recently it has become much more difficult to just
"go in -patient' as many within the medical field are in on the game
(and often not affiliated with "pocketbook money" that goes with being part of the team "that gets bonuses from "letting Proxy" slip seamlessly "back in the system".
The main reason I am to go to ER at night is EVAN and TRU almost know for sure  KAPLAN
and Dr. PINKUS are on duty..
(both 'moonlight" for ProxyCyber...meaning they get some pay off from ...some agency that know Proxy's have to validate their invalidity as thoroughly as possible...as Off Grid Testing according to some article in Atlantic Monthly or GQ is still looked down upon by a whopping 47 % of the demographic that still buys magazines in print..
as I have stated
the main reason it has become difficult to "go inpatient" and thus re -validate" one's
more permissible reason one
seems to stare at things no one else sees or hears
is that Insurance Companies not entirely "on payroll" with outsourced Testing agencies
is about keeping folks OUT ...of the hospital NOT IN...
the main function of an intake worker's job concerning psychiatric claims is
to 'eyeball" the
"perspective  patient"(especially as I mentioned in the colder months) who seek "refuge" in the facility for
this
"3 hots and a Cot" business,,,and these days
medical insurers have also been asked to track a perspective patient 's online activities concerning posts made 3 or four days prior to "walk-in" seeking psychiatric intervention

do you believe the tv is talking to you?
do you hear things?
do you see things others do not?
do you believe others are controlling your thoughts?
what is today's date?
who is president of the united states?
what does the sentence " Doe a deer ,a female deer mean to you?"
repeat after me these words APPLE AMY BILLY GOAT SUM....
Posted by vvvvv at 9:20 AM