1965..-"tHE making OF Cole Cohen/EARLY ACHIEVEMENTS IN HUMAN ENGINEERING 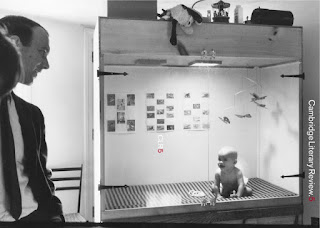 SCENE 7(the Blob)
///////////soy products known to cause
increased estrogen levels
were rotated with Oestrogen shots
with what the Drs at Edgemont Laboratory
jokingly called
simply "the sow's"
diet .
The Sow who was birthmother
was some whore
with a rap sheet for shoplifting ...
she was to remain in county till the baby she had already signed over
to Edgemont
was born
in return for her womb
and the boy in "it"
the "sow" was given vouchers for housing and food she could use once the "kid"
came out of her,,
her cell was deliberately made "homey"
deliberately painted a bright pink ....
as the researchers wanted to see how much
feminity  the boy might absorb in vitro
with shots of Oestrogen
every other week.
already the bABY'S
years one through 5 were layed out
primarily to
induce in the boy
conflicts of Psychosocial development
the boy the scientists at Edgemont  already called.
"A Boy named Sue"
the kid would never get to know "the sow'
as it was important that the child feel
the lack of bond between He and what he was to assume was his birthmother
in all it's entirely and moreso lack thereof
a "spotter" had found just the right vehicle
for the "Boy Named Sue" experiment in
a pretty youngish actress who had auditioned for the role of "Mother"
in a deliberate 2 day open call for the film  "A Patch of Blue.

Cole Cohen's lawyer explained
Evidence is Given of Facts  by way of "Oral Evidence" or "Documentation and that the Burden to Prove Fact is on us...but not necessarily YOU...you don't have to say anything..

"Nor do you,"Cole said tipping the stack of files onto the floor."There is no way on earth I would ever want this brought up...anywhere..in any way"

"Thank G-d," the lawyer said,"now all we have to do is get you sentenced to life without parole"

"no ,on that score as well.....OR I will use the Edgemont defense"

"me and you Cole...we speakin in the same language"
Posted by vvvvv at 8:56 AM