it looked like any remote control.
cept" for the mini dish...
but still .
folded
it was
smaller than a typical lap top...
"it's sorta like a Taser ...
he said
,,
but instead of  the tase  dis-mobilizing the body
the tasing is aimed at the face
disfigured another's face ,,,
the directed energy ..if focused correctly  excites the 5th and 7th facial nerves and ..re routed the signal firings of the 3rd facial nerve,,,
:it's scary as hell...you like automatically ...see the "target's" face go wonky
than go slack
than go just grotesque,,,. 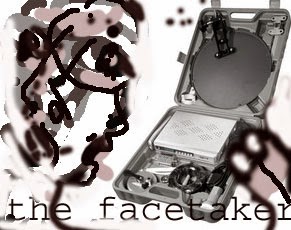 www.google.comhttp://www.google.com/patents/US3170993?utm_source=gb-gplus-sharePatent US3170993 - Means for aiding hearing by electrical stimulation of the facial nerve system