just when you think your mind can wrap itself around the fact..that what is happening to you is nothing more than your being used as human organism so the powers that seize can learn how to use psycho-techno electronic biological devices  to drive a human organism to suicide or a type of madness so ire-tractable that one must forever be held in the chemical lobotomy of neuroleptics ( a death in itself)
one comes upon information that fits the peculiar-ness of aspects of this   situation
that are  10 times more terrifying than this being done to you (and hundreds of thousands others) not simply to drive you crazy or to suicide ..but to prove a point 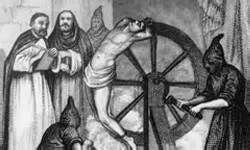 .and  at the same time punitively act upon the subject 's nervous system and brain
if certain points..or ideals of- what man should be and  how man should act, as well as think to toward or against  co called sins and morality...not necessarily through what one does
but scientifically how one reads and charts..to any number of Morality Plays
insinuated upon  one placed in the binds of  Mind Acquisition technology to study these non vocalized but thought reactions

every think one has ,every automatic emotional response..retrieved memory  (relived again in it's extraction ) every  ...deed..done and or considered literally ,in real time
judged by either a machine set to capture these often fleeting responses
or worse a real time panel of fellow humans  .whom feel they possess the ability to quite literally

measure the worth or worthlessness of a man or woman by such  machine
and the technology that allows another man or woman to literally read another's mind
and next judge the qualities of another human based upon where their transcribed brain signals fall on
a predetermined Norm
of Good ,Righteous and Moral thinking
by those who can next  strike one down with a genuine  bolt of lightning of direct energy to inflict
muscle tightening.
physical pain
and or a bolt of synthetic telepathy or radio frequency
to direct a 'Voice of God"
inquisitional interrogation (not so much to cure one of certain affronts of 'christian ..or judeo christian thinking) but to shame and insinuate into the subject WHAT is missing from their soulmanship.
a soul that has been broken into
to be read.and juried...neuron to neuron..synapse to synapse...
perhaps not just in this life time but into
what novelties of life everlasting this same technology might have in store once
a person can be gathered in such an all consuming way.