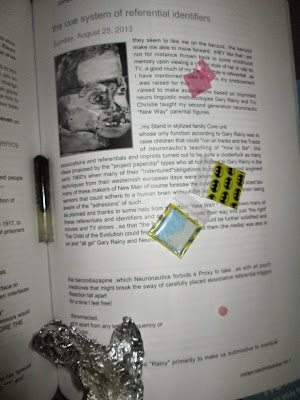 alibi albiboi alibunk
I am only supposed to write from the books that come every month.
and the remote monitoring stuff.
what you might call the interface back and forth.cuz of some wacked thing they did to me a while back that's about as magic as
a card trick when u get right down to it
and boy am I down to it with "My Team" who I despise ...probably as much as they despise me..
they do this wacked shit to me.
make my face all swell up cuz they go poke poke poke on my facial nerves AND some thing -a -ma jing...in your brain that makes calcium ions and stuff.
to "show me"
..well ..they show you they can go manster on your ass enuf times ..
you're like

ok I be manster man..
I 'll still go out all moon faced and eeeww looking ..I mean who gives a good G-d damn
am I supposed to keep towing the line ...to have my face look good?
would you?

of course you wouldn't ..
you'd just say "give it to me  baby uh huh uh huh"..
make me as beasty lookin as you can bro'

any man or woman who will tow the company brine
for a good face day
is no friend of mine..

(2)
they want me to write Their story
..and I started to..
after all much of the story concerns how I was brought up
Gary Rainy parenting style.
and yeah I joined Neuronautics...but everyone knows Neuronautics is just some front...I mean don't they for
the Black Slacks.
the entire damn "religion' is from the KUBARK Counterintelligence Interrogation manual. that the dude I refer to as Gary Rainy uses ..as this self help  manual, INWAY to the ENWAY...so the guys and gals that come to Neuronautics can lose their ego
and become ONE with da' great ENTITY
all the group is ..
is this window dressing
for this group of project paper clip
clip on tie guys to go MK ULTRA on folks in plain sight..
Gary Rainy the grand poohbah was selected to run this wacky group
only because the VA found him just loony enuf to be controlled and just charismatic enuf to
keep people in line
his ego that knew no bounds ...guaranteed he'd never ...loose lip the Op
as he liked all the stuff money gets you and the power being am "in house' stooge gets you..
I went through my Neuronautic's days ..convinced like some shmuck ..that I was to get insid einfo..
about this "cult" but after a bit I'm like Yo'
this place is run by spooks ..
this place is front for spooks
and I hate spooks
yeah all this mish mash you hear about Neuronautics being dangerous..
YYYEAH ,,it is..KNOW why..
well I already said so..
anyway...a lot of this has to do with folks even spoooooooooooooooookier than spooks
and that's Hollywood
and producers.
who have their own way of breaking in the
actors who really just become  detainees
anyway..
Hollywood has all these clauses built in...that holywood has to take orders from the spooks.
cause of propaganda..
and some such shit
so tv is like this military weapon ..
at least ..to the military types
and there's nothing a movie producer likes more than thinking he's double 0 ..7
and I wa ssorta' born into this fuck fest..
to be this writer //artist wacko..
to be an example of "the type of scum we don't want  in society" no more.

i'm supposed to write such profane shit..and wacky political mumble jumble that ...some law will be passed saying ..."freedom of speech yes...but not if you be diagnosed THIS NEW form of wacko..

or some such shit.

but don't go writing about ..
these odd bits and pieces I hear.
about DMT and project blue bean also being a smoke screen for just plain pulses sound and micro waves to make ...the so called un desirables ...go all Jacobs ladder.
and stick with in this dumb paradign of Gary Rainy
....
but I refuse
so it's face dances all over the place man
and who knows what they' do next.
Posted by vvvvv at 8:09 AM