1994
i was working 2 jobs.a clerk in a hardware store and unloading trucks at a Ralph's supermarket.
i was living either in  an OK weekly hotel some weeks and on the couch of a fellow member of the "org"
weeks when i couldn't afford both eating and sleeping .
it worked in an odd kinda way.
i was younger
so everything that would have been intolerable now seemed
somehow like it was going somewhere
it helped that i was taking courses in Neuronautics
which gave me a center
a base
and an instant group of like minded members
who were also
moving forward up the TruGenic chain of existence

After Level One Neuronautic Education is all about something they call "Reach"
Reaching is the key to The New Way
Reaching is all about Thinking a certain way
that uses parts of the mind most people can not
"The 90% of the brain we don't use"
Gary Rainy believed is the part of the brain that matters
it is the part of the mind that "Knows without Knowing' and "sees without seeing"...hears without hearing
People outside of the Program which he called Ruiners
tend to mock Neuronautics and Gary Rainy
because as Gary Explains ,"They DON'T HAVE REACHING CAPABILITIES and because THEY sense you are developing something THEY DON'T HAVE they instinctively attempt to RUIN your spiritual  progress
He says this tendency to RUIN a REACHER( one who can SPONTANEOUSLY EVOLVE into something BETTER
than they are
Gary Rainy compares RUINERS with the Giraffes who were too inferior
or self possessed to grow long necks
"Ever see a Giraffe,"Gary wrote,"with a short neck who looked like a horse with spots?...Of course YOU HAVE.Look at your parents!.Look at your teachers! Look at The Motherment ! Look at the Psychiatrists!that laugh at you for being a practicing Neuronaut ! Who laugh at us .We have a term for these people besides RUINERS .We call them Little Necks...Why look all the little neck giraffes are laughing at the giraffes whose necks are growing .."ha ha ha"look at the giraffes whose necks are so long..."ha ha ha'
But we all know what happened to the little neck giraffes don't we??Ha ha Ha!!"

according to Gary Rainy
Years
Lifetimes
people who aspired or wanted to grow longer necks
moreso HIGHER MINDS had to deal with the Little Necks of the world
who so despised our
predisposition to grow longer necks
and all this INTENT (or what Gary called Neural Rot)
that RUINERS EMIT psychically weather they think so or not or want to or not (for RUINERS ,according to G.R. seem to have only been placed on earth to hinder their Bettor"s evolutionary inheritance)
Test this theory yourself
he suggested in one of his taped lectures
Call or see your parents or friends for money to help you
pay for your courses...
and see if they send you money
likely they will show some feigned concern and say something disparaging
about The New Way...

I had
tested both my parents
and my so called friends
and it was exactly as G.R .predicted

I cut them off
I "disabled" them from doing further damage
"these sheeple," G.R said ,"had probably been in and out of your Brain Map for several lifetimes.
Smearing your brain with germ-ie ,dirty, finger prints
playing with your mind like a toy
to keep you down
and dumb..."

"Your Mentors are there to Re-Parent you
don't be afraid to if you re-experience some of the same feelings a baby might might have...don't be afraid if you regress or even wet yourself because you forgot how "to go"..
You might even forget How to speak.
Don't worry
nobody taught you "how to go' or "how to talk"

I was in a way learning to talk again
but not specifically with words
"words are how THEY get you.RUINERS made sure to find a name a term for everything..THAT'S HOW THEY GET YOU!.for if you see something .if you see a cat for instance what comes into your mind.
a picture of a cat.
you have no choice...it's an AUTOMATIC THOUGHT.But not YOUR OWN..I can teach you how early man thought before word were invented to limit The False Idea of Human Nature...which goes against Human Instinct."


Level One We learned how to talk like babies.
How to ball and wail and if we wanted to suck our thumbs or roll on the floor.
During some of these sessions we were asked to wear diapers as our
systems might
return to the years before "potty training'

Jessica and Kurt were my Re Parenting team.my mentors
and were concerned about my debts to The New Way
Kurt made a few phone calls
and said I could pay off some of my course load
by doing landscaping  at The Rainy Ranch
on the  weekends  i had off  from  the hardware store
real work , Kurt said ,no putzing around..alot of dirt digging and rock removal
they were putting in a large fountain  and Koi Pond behind the Main House
where Gary Rainy ,his current wife and his son ,Evan lived.

I was told I could sleep in one of the spare bunks in Building D
which housed Trainee level 5s who wished to become permanent Organizational Members.but must not speak to anyone above my station .which basically meant everyone "in the compound"
I was told to lower both my head and my eyes if I encountered any member of the Rainy family
. 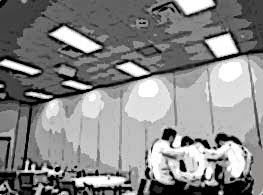