My Aim is True 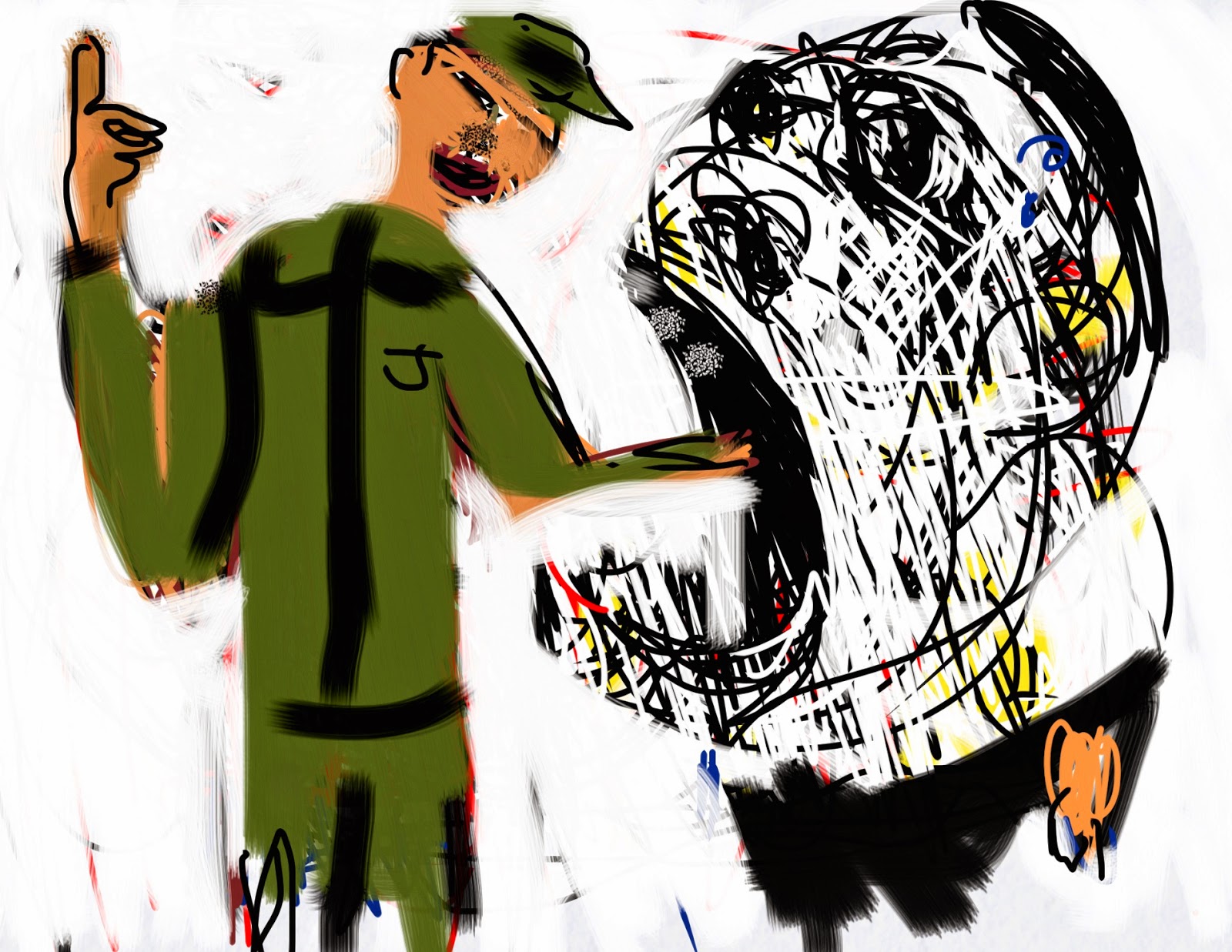 Myron May argues that “through nanotechnology a Monitor, a 'handler" can   induce all sorts of things in a targeted individual.They’re able to manipulate a targeted individuals bodily functions–things like their pain receptors and stress hormones. They’re able to speed up a targeted individual’s heart rate to very rapid speeds.
Shortly before the shooting, He sent packages to several friends and acquaintances with materials explaining his plight. At least some of these parties then turned the package contents
over to law enforcement.

"I have actually been induced to have panic attacks on two separate occasions. This is before I realized I was a targeted individual. I shouldn’t say panic attacks, but rather what I thought were panic attacks. Basically my heart rate just started speeding up very, very rapidly. It was just going at full blast. I thought I was actually having a heart attack. So I went to the hospital. I had the ambulance called to my job. They took me to the hospital. [The hospital staff said,] ‘Oh, nothing’s wrong. Everything’s normal. Your EKG is fine.’ So, I just resolved that I was having panic attacks. Now that I know a little more about the technology I realize that I was not having panic attacks, and this was when the harassment first started, and this was part of the game.”
He explains how such technology is employed to increasingly isolate targeted individuals.
For the individual who doesn’t know they’re a targeted individual, or who doesn’t know how this technology works and fits in to the whole scheme of the targeted individual program, all you know is that you’re hearing voices in your ear. You start to think that maybe you’re schizophrenic, or having some sort of psychotic episode. And if you try to explain to somebody else, “Hey, I’m hearing voices in my ear,” then naturally they’re going to have the same conclusion. They’re going to think, “OK, you’re  schizophrenic,” or “You’re having some kind of psychotic episode.”
The reality is you’re not.
It’s these “voice of god” weapons. Synthetic Telepathy And this only serves to isolate the person it is being used upon. If you tell a friend or a family member or a co-worker or an acquaintance, “Hey, I’m hearing these voices,” those people are naturally going to want to stay away from you. Because you’re trying to come to them for help, or explain to them something you have, then you’re going to naturally withdraw when you’re pushed away like that. And so, you’re only further isolated.
Through “image induction technology” one's "handlers" are capable of seeing the real and imagined representations that a targeted individual experiences or conjures. “If I’m thinking about something in my memory,” He posted, “something that happened several years ago, and I have an image of that in my mind,  they can actually see that too. Or, if I’m imagining something, and there’s an image that I’m imagining, they can see that as well.”
He draws the presentation to a close by appealing to elected local, state and federal officials and mainstream journalists to further investigate and sincerely address the crimes of organized electronic harassment and gang stalking.
I challenge you to not just dismiss me and the stories of other targeted individuals as people having mental illness, but to seriously consider the story and consider the possibility that the story could be true. The story could be real … Research it yourselves. Have your aids and assistants research it. I challenge you to open an investigation. Pass a bill, pass a resolution so that an investigation can be opened. Establish a commission that will look in to bioethics and the treatment of targeted individuals, and not just dismiss it as, ‘These are schizophrenic people suffering from psychosis or some other mental illness,’ because that is not the case. We are subjected to torture daily … I challenge you, as elected officials, to do something that matters in the lives of your constituents and people across this country.

In their episodic reportage, corporate news media failed to delve deeper in to his claims of electronic harassment and gang stalking. He repeatedly asserts in his final video presentation that he was not suffering from mentally illness, and challenges journalists to actually delve into pressing issues and phenomena, such as those surrounding targeted individuals.
To the media, I challenge you also to research and investigate this issue. Give it a real investigation. Don’t just dismiss it as mental illness. Don’t draw conclusions based on ignorance. Don’t substitute taglines and lazy journalism for doing the real work that you’re supposed to do, which is to look deeply in to an issue and give both sides of it. Research the technology. Dig Deeper. Question the FBI. Question the CIA. Question the NSA. Question the military. Question your government. That’s what you’re supposed to do. And I challenge you to do that. I challenge you to revisit this issue every single year, because it deserves that much.
INT-APARTMENT -NIGHT(1022 Pine St.)
"Offenders against us get ill because they can never truly justify there offences
It is a mercy to put a padlock on such a person's activities. Every word a RUINER  says or WRITES against US, every plot every he devises to escape Mentorship...and the Betterment
a Direct Neural Intervention provides turns on the RUINER and
pushes the RUINER further and further from the
Fold
to a Regressive state
so it is  a relief to a RUINER to be punished...
.and broken down
so we can rehabilitate him once more to The New Way.
..we break a RUINER down to build a RUINER up.....so a RUINER's thinking is clean and clear enough  not simply for  interface with his Mentors  but with The Entities Above .
...never think of our tactics as anything but our perseverance to make you Better and Purer in your Emanations...."The Voice said unto Cole Cohen the day before Cole would only be referred to as Cole L.Cohen in the news
"THIS AGAIN!"Cole thought
knowing his thoughts were transmitted somehow to "Them"
but it was making no sense....
and what little sense Cole had left.....
he felt impelled
by whatever little of "self' he had left in him
to somehow explain......
but nobody heard him................
"THEY WILL HEAR YOU SOON ENOUGH COLE1
you will be a hero!" the voice said unto Cole.
take out a cell
of Jihadists.
who will be at ****** restaurant on ****** at ******
It is Your Duty as an American citizen
to AIM your aimlessness at those whose AIMS
are only to destroy the fabric of society!"
the voice said
"
He  feel numb...suddenly
He felt nothing....now but the "THEM" inside him
INT-INTERROGATION ROOM-DAY ( .Sherman Oaks CA)

and Cole  felt nothing when he shot the innocent people the next day
Cole sat across from the federal agent in the room .....
who showed him photos of the "so called" Jihadists"
all of them American
the agent asked Cole ,"what else did the Voices Tell You ?"
'They told me I was one of you."Cole said
"One of who?"the agent asked..But there was a look on her face ...and a barely notice-able...shaking of her head that said 'no,no....don't ever say that"
Cole had become used to observing these small barely noticeable gestures.....as all his life ,since the day he was born people spoke to him  this "special" way...
The agent asked Cole  again ,"WHAT else did the VOICE tell you?"
"It told me so many things I can't recall" Cole said watching the agent write something on an index card she passed him after making some type of hand gesture at the camera .All it said on the paper was one sentence ,"I don't like Mondays"
'so,"the agent said ,"tell me as succinctly as possible WHY you did it?"
Cole looked at the agent who glanced down at the index card.
"I.
Don't .
Like.
Mondays."
Cole said.
and the agent said...."You need not say anything more.
Do you Understand?"
Posted by vvvvv at 10:01 PM