I stop reading the information Evan directed me to.about Human Experimentation..and concur with Evan that there is nothing inherently wrong with trying to read another's thoughts or decipher visual information or emotions from a person to be studied,categorized and used to help Hollywood veer programming based on these gathered reactions..
at least comparatively

Evan is furious...that the word "comparatively " is "in my signalship- I feel his fury run through me as if it is my own
don't you understand DUMBO!
if we get better at this we can eventually ALLOW people to LIVE forever...
we can upload their minds.,..and than down load these uploads into for instance a baby..
or  some robot....or some new kinda' organism...or take some junkie whore miscreant LIKE YOU
off the street ..and just ..reuse them so some old rich guy can be young again...
soon ...soooo soon  for the right people there will be .no death ..

I try to hide my thoughts of wanting to off myself..
as few will THINK ABOUT the fact that  whomever "owns" or attains another's soul
via interface
may also do with it whatever  they want with it..
My mentors have warned me "in dreams" if I keep up my bad attitude concerning this venture
they will place my worst memories in 'a loop" placed in a carp placed in an aquarium so small the carp cannot turn around ...and I will be (as carp) self aware...that "I am Dumbo" as carp reliving my worst memories and fears over and over and over...
as a fish unable to move back and foth whose mind has been modified by biotech to....


"what did we say about your not being allowed to write about certain renditions we imbued upon you asshole? ....there's a reason  I directed you to that site on gruesome human testing..not as comparison but as WARNING!...that you are crossing boundaries  you know damn well you are not allowed to cross...".Evan interfaces.

"I HAVE CROSSED BOUNDRIES!" I graph back,"YOU have crossed BOUNDRIES one was never supposed to cross...including one's blood brain barrier with fucking CHIPS you Psychopath.!"

"Awwwww is Dumbo having another one of his fits again ?"Evan graphs sarcastically."why can't you be more malleable ...why not write a young adult book that introduces the Singularity as Enhancement instead of....En-Trancement...like you were SUPOOSED TO!"

"Sweetheart you ARE a version of Fuckin' Joe 90 in a poppy field"Evan graphs back., "Philadelphia obviously isn't working out for you....in fact I liked you better living on the streets eating out of garbage cans..Roll with it,"Evan graphs,"Please ...we have so few of you left...most of the one's we've app-ed who were also raised Monarch style have either killed themselves or have been murdered for not "playing their part".

"And what's my part exactly"I graph

"The maniac artist our Kevin McCarthy shouting "it's the end of the world" ,Evan graphs,"so we can can gage if anybody gives a damn...on the Brightside look at it this way-in movies the  madman who screams "They're Here The're Coming.This isn't a dream this is really happening ," at the beginning of the movie
always turns out to be right in the end
.the system is set up that nobody can fight back ..nor fight "progress"
movies always have 2 or 3 ...mighty survivors to insinuate
there is hope
The Monsters .the dragon has been slayed...
you consider us monsters for doing this to you
and we consider you a monster for turning on the Science-ideology of Neuronautics for
social cohesion
and you had better believe Adam Parker will be President in 2020..."The Future Is Ours...and those who OWN the future which IS Artificial Intel AND Brain Link Technology
will be making NEW LAWS based upon the undeniable Science of Brain Map,Brain Signal Transcription
that will scientifically PROVE whom amongst us is " an expendable life form"
it's already arranged
MONEY! not ethics...RULE the world
we wanted a Jew to HELP Jews understand that Neuronautics welcomes ALL Thought Styles even Jewie Intellectualism
....there is ,I mean was  hope for you Dumbo IF we begin or had begun  to see a turnaround in your anti -scientific transhumanistic views
dontcha' get it?
your blog was supposed to be some "Flowers for Algernon" chart of "shmucko junkie            LOSER! deviant artist
GETTING BETTER via the interface NOT! worse!...but Dumbo decided to "play games"
with the blog
and games with people! he had no business (BIG BUSINESS) fucking with Mister Wickerman!
The Only Industry that Matters is the A.I. business you weasel...I can see now why people hate Jews!
and WHEN THE MARKET CRUMBLES
AS IT IS SET TO QUITE SOON....
boy oh boy! will you regret you wasted 3 years of your life writing
instead of creating hard assets...
art is a commodity in times of financial collapse.
artists get RUSTY when their fingers are not  wrapped around paint brushes but tapping at a  keyboard ."

"OOOOOOOOh not like this one buddy,"Evan graphs gleefully,"Every day you typed stories  nobody understands but your captors- COULD have been spent creating HARD ASSETS..uh ...d-d-d-duh-DUMBO .yOU DO REALIZE  every word you have written ,every high concept interfaced to you
including your last post concerning Pino Barbital is public domain...property not of yours but of Blogger  of GOOGLE..
why you think we imbued upon your nervous system a constant algorithm of  Fight or Flight in tandem with "the storylines we introduced upon you.....kiddo...to make your very nervous system FEEL so JUDAH MACABEE  Davey vs Goliath frantic ...a who cares about MONEY when Liberty and Self Autonomy are  at stake nature would be instilled upon thee?
....well let me tell ya; something MONEY! IS! Liberty and Self Autonomy!... and I want to see you with nothing Jewboy when the walls and Wallstreet come tumbling DDDDDDDDDDDDDDDDown!" 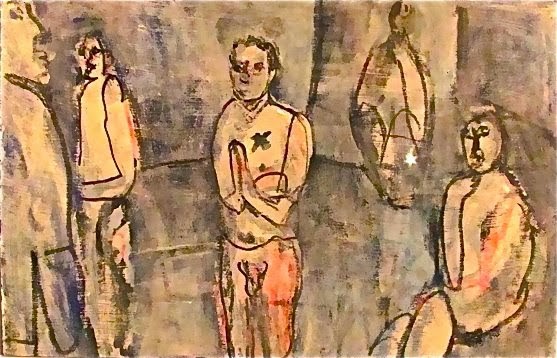