it came from outer space! 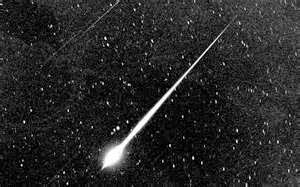 "the media is how we understand things
isn't it.?" the voice imparts...a new voice ,I am unfamiliar  with "says",
"If you woke up tomorrow and a telegenic news anchor explained to you
a meteor for instance was heading towards earth
and that suicide pellets were being given out at booths painted military camouflage green and brown
by men dressed as officials
and if a loud "this is not a test.this is not a test."sound
was playing through speakers set up...by officials who set such things up
and
IF...the news on the tv.was not interrupted by commercials.
...and if photos of this meteor were shown again and again.  And again
...and prominent appearing" tele- gensia  "explained how painful and harsh
this catastrophic event WILL BE if one does not take the pills being dispensed...


I am confused...by the introduction of this line of story.
it is not the same as my usual interface
I hear something akin to a dial tone
and next  Evan explaining the "mix -up"- they fired " some girl" named Mandy who was stealing paperclips or something...and "the bitch" had deliberately mismarked various  Chatterbot programs...so bothered was Mandy by her dismissal from ProxyCyber
and I am  not meant to be  interfaced  the "Meteor" concept of Mass Assuagement  based on traditional media
----thanks to Mandy fucking around with the programs and disks  I was transmitted "the wrong" interactive storyline,"sorry"
it is the first time Evan has ever apologized...and I am quickly imbued with "my " story line.which I am to mull over "for gaming"purposes-

Pinobarbitol had been deemed safe enough to be sold as a sleep aid with no long term side effects if the consumers took only therapeutic doses of the new sleep aid.A prominent "black box" warning was placed on the packaging of the new OTC sleep aid to emphasize this point.Although Pinobarbitol had a chemical structure similar to barbituate enough alterations were made to the chemical composition of Pino-B to make it less habit forming or "dangerous".The marketing campaign emphasized that only 2 tablets could be taken for a comfortable night's sleep.The marketing campaign was deliberately aimed at a demographic ProxyPharma ,makers of Pino-B assumed needed a good night's rest,namely those who made less than $ 15,000 dollars a year.

3 weeks after Pino B's over the counter ad campaign and distribution a number of reports come out that some consumers were deliberately taking Pino-B in higher doses than recommended....
The reporting of these incidents of overdose were accompanied by many news articles and newscasts  grieving relatives who mentioned their deceased loved one had "at least" died seemingly painlessly...

5 weeks later an advocacy campaign to ban Pino-B from over the counter use is overturned by members of several departments of regulation and legislators ProxyPharm had financed during "other
campaigns".

"That's how we're going to introduce the subject Dumbo...,"Evan imparts"
someone else we 'app-ed" is doing "Meteor".Pino -B Dumbo is actually a much better story"

"well," I graph back,'what if we combine the two stories...since you already,inadvertantly or not placed the "meteor" story in my head'

I imagine for a moment that these nano chips were released in the air...and everybody 's mind could be read...
to see in advance how they'd respond to communal "evoked events"
and Pino -B...

and I "hear" a loud ,loud tone zip through my head
and I receive Evan's thoughts
cursing Mandy...for intentionally screwing up my 'Mentorship"
Posted by vvvvv at 11:23 AM