the 2 Rabbis /Merge Mind to Mind Technology and the Holocaust


I say
"does my missing the High  Holy Holdays mean I will not get into heaven?I know Yom Kipper is about asking G-d to be written into the book of life..

'I don't know if people are allowed in heaven if they don't follow the dress code... but I suppose they make exception...she jokes ..

The rabbi and I were  quite piqued,the rabbi's secretary says," by your email concerning some...Voice.you hear telling you the Holocaust and things like images of burn victims from Horoshima will detroy the future of Mind to Mind Virtual Reality and your company
wants some advice on the subject....

"They're not really MY company...they TOOK me quite a while ago and placed nano tubes in my nervous system...human testing.
..the Brain initiative all that
.ACTUALLY THIS INITIATIVE IS QUITE OFF GRID,,,"I quickly add,not wanting to step
on any toes...yes quite ,quite OFF Grid

"NOT SO MUCH AS YOU MIGHT THINK,",i SAY," TRYING TO KEEP THE "UP TONE" OF HER EMINATIONS "uP"

INSIDE THE RABBI'S OFFICE ...THINGS HOWEVER ARE NOT SO UPTONE..
.THERE ARE 2 RABBI'S (MAYBE FATHER AND SON..I DON'T ASK...NOBODY WANTS TO BE TAKEN FOR SOMEONE'S FATHER OR SON...IF THEY DO NOT LIKE THE OTHER ...TOO MUCH.
..AND THERE IS A SENSE THAT THESE TWO MEN...ARE AT ODDS.

...I BRIEFLY WONDER IF MY SYNTHETIC TELEPATHY RUNDOWNS HAVE CROSSED OVER TO MY NATURAL CAPACITIES CONCERNING AN ORGANIC "MIND READING' ADAPTATION

I CAN SURE SENSE HOW MUCH THE  older RABBI'S ANGER GROWS
AS I READ OFF MY LIST OF CHANGES
WE NEED TO MAKE CONCERNING THE HOLOCAUST ....
AS VIEWED and thus interfaced  "INNER vISION" STYLE WHEN ONE IS  engaged  in a BRAIN COMPUTER INTERFACING

""'MERGE'S IDEA IS TO RE ORIENT CERTAIN Ingrains THE MIND HAS PERCIEVD AND ALLOT these IngrainsTO NEW ARRAYS OF NEURAL NETWORKS.

..PROTPOTYPE PROGRAMMING MIXED WITH ASPECTS OF OBJECT ORIENTED PROGRAMMING
basically
The
RE DELAGATION OF INITIAL VALUES OF FEATURES ONE HAS HAD imprinted ON ONE'S TEMPLATE CONCERNING
- MAINLY THE HOLOCAUST.the camps ...the guards,,,
.SUBROUTING PRIMARY INITIAL VARIBLES TOWARD "EASIER TO SWALLOW 'TANDEMS

"Uh ," I say ,paging through some of the pages EVAN had me write...
"to APPEASE the Rabbi,who does not seem to understand..."our deal,our concessions to the extreme nature of the situation......" 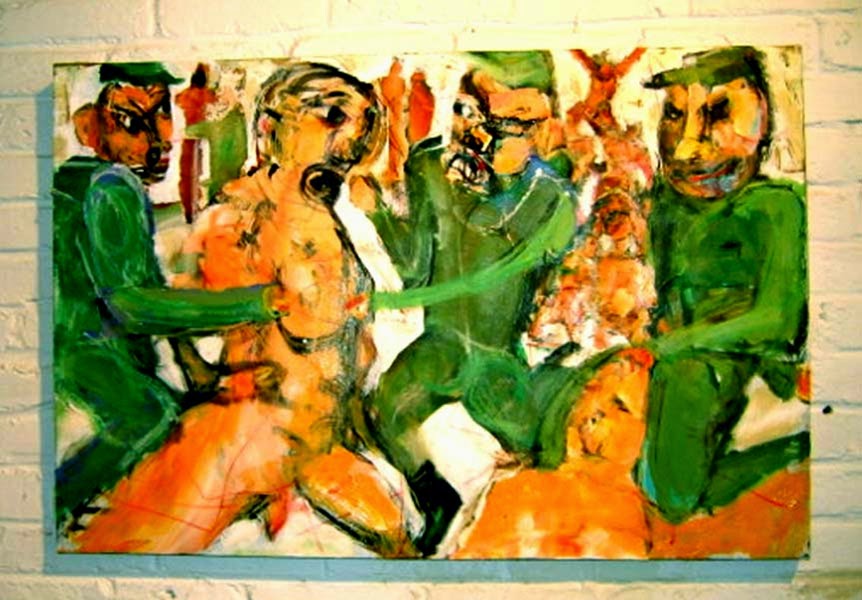 reading from ..my notes ..I try to make my voice sound more authoritative,,,clinical

"Now.....
ZYLON b FOR INSTANCE WOULD ALWAYS BE INTRODUCED AS THE SOUND OF XYLOPHONE...THIS WAY...zYLON B IS NOT "LEFT OUT" OR FORGOTTEN" FORM THE
COLLECTIVE MIND BUT SIMPLY GIVEN A LESS INTRUSIVE VARIANCE ESPECIALLY FOR GAMING

"WELL ,ZYLON b CERTAINLY WAS A REAL SHOW STOPPER,"the Rabbi says ,taking my arm and slowly walking,pushing me out of his office ,"...AND IN A PERHAPS IRREVERANT WAY I CAN SEE HOW REALLOCATING CERTAIN SYMBOLS OF GENOCIDE MIGHT HELP "IT BE MORE FUN" TO PLAY POKEMAN OR SOMETHING MIND TO MIND...he continues walking me out of the office and out the front doors of the synagogue...
When I hear the younger Rabbi say ,"WAIT"