blacklist (no such thing) 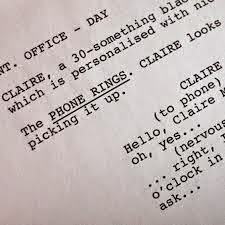 WORKER
Who's THIS BITCH...What? you want some kind of audience? Well so do I. Listen lady, this man has kept me here against my will for over 5 hours now.

CLOS*R
(smiling, as if making a pass)
I think our friend here just wants to know where his wife is

CLOS*R
Seems to have the entire library of  Advanced Technologies down here..I forgot you knew how to work this stuff?

AGENT
Advanced Technologies ? Are you kidding me? What we have here...(The AGENT says, indicating the equipment on the tables )is the equivalent of a stethoscope and  a damn "See"-Meter! The three letter agency "the ABOVE that dare not speak it's name"-have the REAL advanced technologies not this ...this ...this (kicking over a lie detector machine) two tin cans tied together with string !

AGENT
(whispering)
That three letter agency nobody dares speak about has machinery that could MAKE this guy
"talk" in 2 minutes.

AGENT
(not in the mood for The Clo*ser's joking)
No,they have very small bio sensors you can just inject into someone's arm...(quietly,only to the CLO*ER)
then the sensors travel up into the guy's brain and in less than a half an hour all the thoughts in his head could  be transcribed  like teletext  right onto a computer screen..ALSO we could see
images...sights the guy SEES in his brain...sights of where my wife is...

The CLOSER backs away from the AGENT a little

CLOSER
Now..THAT's Creepy..( walking to a table with a cooler on it ,she reaches for can of soda)
Do you mind?

AGENT
Toss me one will ya? (she tosses him a soda,the AGENT turns to the WORKER/SUSPECT) Hey,you thirsty..?

The AGENT goes over  to the tied up man, opens the soda and spills the drink down the guys's pants.The WORKER begins kicking and yelling.The AGENT and THE CLO*ER go outside

AGENT
Well,of course I did..and do you know what they told me? They told me.ME.That there's no such thing..

AGENT
(looking at clock,than yelling)
I helped them make the damn -no such thing !

Mary Kimble's teleplay for the filmed but vaulted  episode of"The Clo*ser"was written out of the season  supposedly because of a  reference to a "See Meter"that a producer, a practicing Neuronaut had "caught" in post production, Although the words "See Meter" were  edited out of the episode  the producer suggested that the teleplay writer might have purposely placed other less easy to recognize  veiled denunciations at/or. or to the "organization'  known to use  so called "mind mapping technology" And because of the possibility that Kimble "was up to something" a meeting was held with programming and a decision was made  to simply "scrape the episode" from broadcast.And next scrape Mary Kinble

Some in the cast and crew found it ironic that an intentional or unintentional "jab" or  "reference" at
"The Movement/Church" was cause "for alarm, in the 1970's it was Neuronautics that was indicted for placing Associations based Referentials in Parsasol Productions made for TV Movie ,"Safety In Umbers".Mary Kimble did not think the shelving of the episode had anything whatsoever to do with a reference to a so called "See Meter"but to a "movement " of some OTHER kind
Posted by vvvvv at 11:33 PM