it would have seemed to phony to try to scream  the type of  screams
he only heard on TV or movies
which would have suited his present state of mind
on the balcony
.summoning up the nerve to jump.
the attempts at  finding an example  of a 10th story pre suicide leap scream
conjured up
an establishing shot of the  building
incidental music
A LONG SHOT
followed by a CLOSE UP of the jumper
.THAN a high pitched scream
FOLLOWED by
ANOTHER VIEW OF THE BUILDING
...and possibly another CLOSE UP on the jumper
so much was going on between the log shots ,the building,the visualization of Adam seeing himself in this scenario,while all the while trying to hear  and next mimick the voice of the screamer.and as most screaming suicides from tall buildings on tv were of woman.it took a very long time reversing the imagery to find another signifier of "scream" this time a man screeming.Having to picture a new television episode .another establishing shot of a building ...
and
somehow   jumping had
begun to seem like tv as well


it was the stuff of comic books.
bad comic books at that
too silly to be scary
yet too biologically possible (he had read of nano techniques albiet while wincing,that in fact it could be done)to not be gross.

Gross did not begin to describe the feeling .Or the sight of his face in the mirror on the days
he was not in form with The Process..Or permissive with Aki

"be quick about it,or at least close the screen" aki said.as if reading his mind


.It was beyond belief.He had begun  calling it morphing.As if he was some kind of Adobe Photoshop program.On the days he was not too hideous to leave the apartment for some days his face  was so disfigured by whatever remote means that some person had actually dreamed up. to do research.Because whether or not he saw it or felt it .it was simply too beyond belief to absorb.Or be true. He would spend hours leafing through medical textbooks concerned with diseases or injuries to the human face,be it the nerves,or the muscular tissue or the underlying bone.But it didn't make sense.Not for the alterations to go back and forth.

but he had known that.
he had seen Aki over him in the bathroom pushing buttons.
Knowing.
it was easier however to keep combing through textbooks then to really consider
.To consider what?
That some maniac
had  somehow integrated nano bots that caused disfigurement or beauty inside him
that someone now "owned" his face.
that his appearance was now a  reign?

"actually I'd like some heroin,some opium ..."Adam said, anything to not hear your goddamn voice"

"i can make some calls"Aki said picking up his phone and dialing,"I'm glad you're beginning to adjust,Now come in from that balcony we can't have handsome all chapped .."

Adam stamped into the bathroom .
and stood in front of the mirror.His face was beautiful.His and not his at the same time.
"The gods must be happy with you Adam " Aki said."there are rewards ,to just rolling with it"

Aki  put his hands on Adam's shoulder
.While brushed it off Adam felt the microscopic  bots rearrange themselves under his skin,he placed Aki's hand back on his shoulder, the nano bots seemed to retreat taking a chance ,he looked again in the mirror.Relief

"the stuff  you asked about will be here soon,why don't I warm us up a nice bath...how about tomorrow you go out by yourself,find someone your own age,whatever you want..maybe we can just see each other every coupla days..I can find you a  nice apartment."
Posted by Jim Bloom at 2:00 PM No comments:

Kevin wasn’t working out.
Not since his brother had come to town.
According to Valerie
he needed a lesson
a reminder who his true family was
Dome wasn’t something one spoke about
not to outsiders

The 9 Hz focused extreme low frequencies waves* from the graffitied van outside Kevin's apartment this time was focused on the posterior region of Kevin''s hypothalamus .

As expected the excitation caused by the transmission triggered calcium ions **to build up and than release into Kevin’s blood stream.
Causing muscle contractions from head to toe.
The damage would be irreversible after 8 minutes.
Instant Parkinson’s Disease
Generalized Dystonia of the trunk and limbs
"let him twitch," Valerie said ,as his mentors had upon hearing that Kevin had spoken out and against intraneural interface and
the Dome towers being constructed around the city
Kevin lay in bed.unable to move.
A feeling like pins and needles,than as if an electrical current was passing through and inside his body.
His face tightened and swelled
His arms jerked about as the smooth muscles of his young body were overcome with stimulation.*
"stop ,stop""Kevin thought ,graphed as loud and as sincerely as he could to his neural mentors."please,please,:he graphed.
I will do anything.Anything you say"
and it stopped.
pulse modulated microwaves (as used for mobile phones) can, when modulated with ELF which mimics specific brain patterns change the behaviour of the victim at the flick of a switch. A vast catalogue of control frequencies in the MHz range, FM radio, TV and mobile phone frequencies, have been measured, 147, 153, 197, 199, 447, 453, 456, 466, 853, 883, 884, 887... Symptoms can be depression, befuddled thinking, loss of memory, stress, not being able to cope, manic behaviour, schizophrenia, nervous breakdowns, physical collapse, brain and nervous system damage, heart attacks, cancer...

Contacting researchers in this field of enquiry, they all complain of microwave-like symptoms, headache, nausea, giddiness, eye damage, ear problems...  I have taken show that the 750-1000 MHz range is used by ...services for inducing nervous and physical collapse. Microwave ovens give off 1000 MHz.

Dr Ross Adey's research at the Brain Research Institute of the , ...a catalogue of different brain signals for specific actions, emotions and pathological states of mind were recorded. It was found that when microwaves were used to fire these signals at victims' brains, they experienced the moods, behaviour, and the pathological states, carried by the signals. This meant that by mimicking natural brain frequencies, the human brain could be controlled remotely by use of extremely low frequency broadcast carried by pulse modulated microwave beams (ELF pulse modulated microwave remote mind control technology).

Paralysis can be induced in the target by use of this method of broadcasting preparatory sets encoded on microwave beams. A pulse modulated microwave beam, carrying an ELF signal, which is identical to the one in the motor neurone centre of the brain, is used to jam the victim's motor co-ordination. .analogous to radar jamming,..literally overloads the brain, so it cannot control the body. Pulse modulated microwavewhich broadcast the ELF preparatory sets of the motor cortex at the victim, will paralyse the victim without killing them. Breathing and heartbeat are involuntary actions controlled by another set of frequencies in another part of the brain.

.
.... Sophisticated computer systems have learnt to read the sub vocalised thoughts in the brain, by associating a specific brain excitation potential, with a particular word. .. Once the donkey work of finding the specific frequencies for all the words in a language has been programmed into a super computer, which can carry out massive parallel processing, software is used to match this with real world excitation potential associated with sub vocalised thought obtained from thousands who are used to calibrate the synthetic telepathy devices.
Synthetic telepathy detects the l5Hz, 5 milliwatt auditory cortex brain emissions, that are linked with the excitation potentials in the brain associated with subvocalised thought. New technology, involving low frequency microwaves and RF, has enabled devices to be built which can scan through walls and look inside peoples' bodies like X-rays. This enables security personnel to see a target in his own home and to track him throughout the house. Further to this, being able to see inside the victim's head, would allow computer controlled targeting of specific brain centres in the victim's brain, even when he was walking around the house.

Adey found that by using 0.75mW/cm2 intensity of pulse modulated microwave at a frequency of 450 MHz, it was discovered that an ELF modulation could be used to control all aspects of human behaviour.
., stressing the neural network by constant calcium ion efflux and interference with bio electric fields.

With the advent of synthetic telepathy, 'CCTV of the mind' becomes a reality. 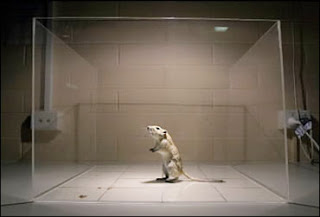