i picture them sometimes in hammocks and sandals and skinny jeans all Riverside County easy going...

your mentors must be having a time of it Liam,my roommate texts
Liam always texts before he calls
it's something he does..
he also snaps in my face
like other people do
to literally 'snap me out of it"
i had a teacher in like elementary school who would do this or blow a whistle
literally in my ear

it's not like I was sitting at my desk spinning plates.round and round..
but pretty close

they didn't know what to do.
so
they

man
i hate thinking about my childhood especially when
THEY are listening
please do no think they commiserate
no
it is unmanly to think back
i have practiced
for their sake
rewriting my childhood
so that
when I "go there" all that i see and they see
is a faceless boy catching a football.
or a faceless boy kicking a soccer ball
into the goal

as much of my true experiences
in team sports had more to do with me ...
staring at airplanes flying above or playing with dandelions in the outfield
i hope that my simulations of He Man
antics and team winning saves impress them

for retribution
and because I myself do not like
sweeping up the dirt on my own rather miserable childhood.
I have managed to create an altogether
different set of memories
for the Mentors to Gaze upon and record

to do this i
start with the sense of smell
black pepper
is all we have.Black pepper and salt and butter. and a fire pit. a large black man named Jim and I  have moved to.
on a small island
on this island
we take on substitute parental figures.
a Husband and wife  ex-vaudeville team
who literally make us sing for our supper

we sleep in a tree house ..
and DMT seeps into our lungs as we sleep giving us both wonderful and  unnerving experiences all at the same time...
it is our job.
to learn to function
The New Way
there is a strange buzz on the island..
from an abandoned castle with transmitters on the spires
for no reason
the antennae
pulse and ...
pounding out transmission after transmissions..the transmissions are hurting the trees

and the trees ,unable to cry
compensate by
releasing magic and mayhem
both at once
Jim and I able to speak to each other without moving our lips..
we have no secrets
we cannot anymore.

my mentors care  as much about my reminiscences (real and imagined)as they care about some rat upchucking  in a  maze
and that's what it's like remembering or thinking about my childhood.
like being in maze of misery
because the intrusion of the interface
makes me so self conscious at times
that all i remember is self conscious times.it cannot be corrected.
someone did soemthing wrong
probably me
to make "it" go this way


serves the mentors right
being brought back to Mrs Maulino's 3rd grade
green tiled ,stuffy ,crummy airless room...her perfume that smelled like yellow and ugly green colors and her face  which she would put right up to mind and sorta rub her face into mine when i was particularly distant..a crazy woman..who needed so much to have someone focused on her ..and her teachings to do this..why the fuck did she care if i was entirely "present" wasn't me who asked to be there.go to school be born etc.....
i wonder if she's dead.
than i wonder if the tiles have been changed in the room and how sad it is
i have a bad relationship with my parents
cause of distraction misunderstanding ...and shit.

Liam knows I am moody since the interfaces began
and more so since the occipital began ,like nonstop...

at first seeing all these overlays was cool as shit..but than i remember initially the auditory overlays were
like being with" Harvey",a dream date out of my league and some scientific genius all at the same time
than
it turned
the visuals
are turning too
...
but sometimes in spite
of the building bad will
things turn

but not that fast..

this isn't some professional company ...but a bunch of frat boy types
who most certainly are connected with agencies that would have a guy like me in them
even to sharpen pencils.
but i don't think these guys know what a pencil is .
being on headset 24 hours a day
i picture them sometimes in hammocks
and sandals and skinny jeans
all Riverside County easy going...
some dog inevitably named Blondie who they're allowed to take to work
as this kind of work
knows no boundaries
like no dogs allowed.

I reread the text....and get out of my own un- headset- ted reverie
(for my interface it's implant all the way...these guy's slipped me some "junk"
years ago...and than made it clear I knew.
it wasn't no "hearing voices or hallucinating" but "this new thing"that will be heaven or hell depending upon how much I can respect  both the Methodology and my Mentors who will be"trying" all sorts of things with me via transmissions....)
and the phone rings...
Liam says'"i read your post, arent you worried some one is taking your little stories and turning them into..finished pieces...i see more and more why they call you Dumbo.."

"fuck you ,: i say to Liam ,kindly ,"I told you that writing it online without worrying about copy write is .part of my demonstration' that with this equipment there is no Intellectual Property.."

".this is a world that runs on money...an...that if you used any sense and wrote ..oh I don't know in a traditional way...like this happens  first.than this.this character is introduced than does this.."

i try to listen but i see the leopard pattern of the bedspread over paid by the most amazing little African sculptures...like 10 of them perfectly using segments of the rather cheap design as chiaroscuro starting points of the overlay of ... 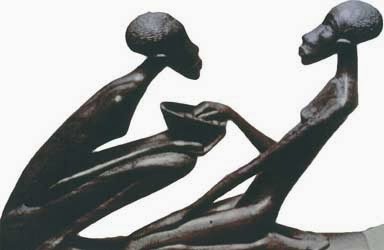 "write a screenplay...write a novella stop writing some very nice ,very interesting plot points online ,it's like when you were selling art for glasses of beer...you're a 44 year old man...act like one..not some little girl showing how she can do pirouettes for her visiting aunt and uncle.."

and i watch the entire bedspread filled up with little African faces and figures...anchored by the bedspread...
absolute art.
given for free,
that nobody else but me can see.

and fuckin Liam is talking about money