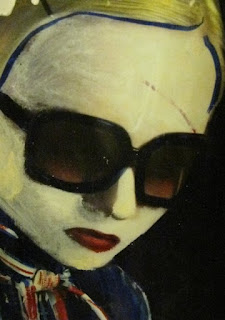 American sociologist Andrew Greeley -According to a growing body of data, experiencing intense stress in
childhood  heightens one's psychic powers.  Severe
trauma in one's early years can precipitate , traumatic experiences early in life may
have more profound effects on the 'deeper' structures of the brain,abused children


have elevated baseline and reactive stress hormone levels . . . . Genes
contain the information for the general organization of the brain's structure


but experience determines which genes become expressed, how and when


activation of specific neuronal pathways "become' and as the abused child 's main goal is to 'go with in " and not "out" the abused child therefore creates neural pathways that are disembodied from a dangerous reality and what is "natural" as what is naturally occurring around them and outside of them is a threat which causes THE MIND TO REWIRE IT'S CAPACITIES TOWARD SUPERNATURAL COMMUNCIATIONS especially in homes where talking or emoting is NOT allowed or JUST NOT DONE the abusing or dysfunctional home —therefore directly shapes gene
expression and leads to the maintenance, creation, and strengthening of the
connections that form the neural substrate of the mind
"severe illness, sexual abuse, physical and verbal abuse
lead to heightened psychic awareness.,the NORC-Luce Foundation
Basic Belief Study), done at the National Opinion Research Center associated
with University of Chicago, yielded interesting results regarding those
who scored especially high for psi, reporting clairvoyance, ESP and/or
deja VU experiences (Greeley, 1975). They were more likely than others
to report a high level of family tension during their early years: strained
relationships between their parents, between themselves and their fathers,
and to a lesser degree between themselves and their mothers.

American sociologist Andrew Greeley wrote, "Frequent psychic experience, it would appear, is 'caused' in part by growing up in a tense family
but has no direct relationship with current family tension."
Kenneth Ring ,sociologist,has observed that adults who report childhood abuse and trauma
become  empowered by these earlier ordeals to be more perceptive of alternate realities. As Ring puts it,
"Growing up under such conditions tends to stimulate the development
of a dissociative response style as a means of psychological defense. After
all, a child who is exposed to either the threat or actuality of physical violence,
sexual abuse, or other severe travimas, will be strongly motivated
selectively to 'tune out' those aspects of his physical and social world ...
by dissociating. By doing so ... he is more likely to 'tune into' other realities...."


In an autobiographical work Eileen Garrett, one of the greatest mediums
of the past century, described just such a cormection between childhood
trauma, accompanied by positive input regarding the paranormal,
and the development of her remarkable psychic powers (Garrett, 2002).
From earliest childhood, Garrett endured virtually daily abuse from the
aunt who raised her.Garrett's comments clearly indicate that such "tuming off," separating
mentally from the immediate world around, doesn't have to be a sign of
mental illness. Rather it can be both a survival mechanism and a meditative
practice, which may lead to heightened psychic awareness.