98,000$ a year -Brenda could have been making at least twice that at IBM which was also experimenting with new surveillance techniques. Flying every 3 days to Terre Haute and larger airports in the same mid west time zone to do her  power point presentations in over decorated, underlit  banquet halls in mid priced “luxury “ hotels nearby.

Bright red chairs all in a row.Yawns and coughs ,hands up and down ..false applause..yawns and more stifled coughs... .This was not what she signed up for when she had set out to be in on the new frontier of computer communication systems.
the sound of muted laughter -
The projected  JPEG behind her was upside down.

Brenda made a gesture with her index finger and her assistant skipped to the next image. A generic photograph of a bustling airport..people in line.
waiting.
the next slide showed cameras. and the next a control room with close ups of various faces on monitors ProxyCybernetics was an innovator of interpretive software that read both expressions and facial cues. ProxyCy also made the new Scanning equipment that was easier to use and much cheaper than the many 'watchers" who had to study  facial recognition patternings. ProxyCyber had sent her to 'dog and pony" the new tech that  scanned and interpreted  the actual brain waves of passengers .
It was the latest strategy for safe travel


, BUT "--don't ever call it Mind Reading technology .” her bosses had said. “It just sounds bad. Call it Neural Scanning.
But This was easier said than done
as  there was always some softhearted liberal in the crowd  with their hand held especially high…


“we call it neural scanning  technology,"she would say.


As if on cue THIS TYPE would bring up things like  civil liberties. How or why such persons had jobs in surveillance was beyond her.


“Yes yes,”she would smile , of course there were ethical considerations concerning brain scans adding that they were   currently in the grey zone  of such concerns  as the innovations that Proxy Products was  making toward  safer travel and a safer world  were ahead  of current  legalities.


A  9 minute scan could adequately sum up an individuals mind set concerning intent. A nine minute reading of one’s inner monologue while somewhat  intrusive - insured safety in the airways.If one didn’t want to “be read” she might tell the provocateur than maybe one might best just “ take the bus"
A  remark that usually put the pundit in their place and usually initiated  a satisfying burst of giggles from the would be buyers ,contractors and bidders.

Brenda would than explain ,as best she could how the machine worked.
How one’s brain waves could be scanned ,it’s very much like an EGG or an MRI machine,very safe.

"The part of  brain that regulates verbal speech produces very specific patterns that can be recognized and than decoded...."

Although ceiling mounted systems were the preferred method of recognizance  for demonstration purposes Brenda carried a  hand held unit  that got smaller every four months. Brenda preferred the initial design of the device when it was larger and more formidable when. Now it looked like something like a sex toy
.or a wand.
it came in a bright blue plastic container with the words ProyCyber on the outside but she kept hers in a burgundy Coach bag that seemed as if it were  specifically designed for the instrument. The instrument she waited until the 45 minute mark in her pitch to show to the would be  merchants.


She felt like a magician at a children’s party doing magic tricks waving her hand held scanner.


Can I have a volunteer?


Sometimes it would take some prodding.


But inevitably someone would step forward


And begin a read


Her assistant would once more dim the lights and begin the powerpoint .usually playing some music


There was not enough time for a typical 9 minute read


Often the volunteer was nervous


This nervousness could be taken for a HIDE


But the software was advanced enough to often separate apprehension

The thoughts were usually  boring. 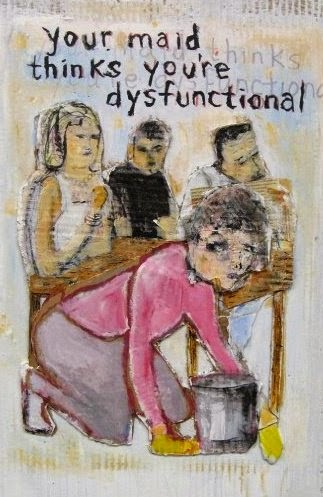 
A trained reader ,which by now Brenda was ,would also have to look at the circumstances of the volunteer and separate and correlate  his situation


To
Intent of thought


I wonder if she knows I'm

not wearing any underwear.”

“Why did I volunteer”


Nor did she mention that Proxy was working on a subtler read that  also could  render  imagery of thought. For instance seeing the volunteer  as he saw himself without underwear
Nor did she mention that parasol was also working on a variance of the device that could emit said images and thoughts to the individual.
a Sort of “mind reading’ in reverse

“Did I do ok “ the volunteer would inevitably ask


Or amazed.Stupefied to see their  interior thoughts on screen
The crowd seeing this blush and amazement from the volunteer would suddenly come to life.
As if Brenda had pulled a rabbit out of a hat,
no longer was anyone coughing  or yawning


Undoubtedly the volunteer  say yes-let them see" ,no longer embarrassed but proud to be part of the fun of “the impossible "made possible

Only once did the volunteer say no.you may not share .virtually destroying her entire presentation.

(Brenda had no choice to put this TYPE of non team player on a list...as what kind of person cares so much about protecting themselves from a neural Scan?)


It was easier doing this song and dance with a partner 3 years ago
Trey had moved on to the greener pastures of the silicon valley.


And she really couldn’t imagine another Trey


he had called her last fall


She wondered if he knew what he was doing


.they had made her sign several confidentiality agreements and she had heard that Neuronautics  was even more restrictive


And than he seemed to


“can I get another volunteer?” Brenda asked the audience


There were always fewer hands up the second time around...seems it was OK to want to read another's thoughts
than -
have one's read
Posted by vvvvv at 7:01 PM