michaelarnold@wiscdotedu;
Dear Michael Arnold
A positive "swing " is very much lacking from my "semi fictional- novel" about Cortical Interface ...according to editors
and your recent work (2011) on carbon nano tubes "potentially "allowing Mind to Machine Interface to be a consumer item  intrigued me ..I was wondering if you can give it graze . I have included the PDF file
the publishers want certain facts   authenticated by scientists and also a specialist in neuro science to give "the story"  a shot of "hope" as according to **** there is a plethora of anti A.I. sentiment out there and nothing too substantial about the reality of Human Testing .
I hope you can be of assistance to lend to the piece  a wee bit of humanity...the researchers as written  are portrayed as mad scientists ....in the usual "Ends justify the Means " as the semi fictional novel was begun with a short piece about human testing..

I was asked  by my editors to write a story about  what are referred to as Targeted Individuals . You see there are scores of people called Targeted Individuals world wide who describe being used as  Human Guinea Pigs.
Dosed with either bio tech somehow
or "Dosed" with Direct Energy /microwaves
to both inflict physical and psychological damage
I was asked to interview a New York Times reporter who had done a piece
on Targeted Individuals but discovered she had not spoken to a single scientist who understood neuro-technology nor surprisingly a single Targeted Individual directly
I was given a stipend to travel
to California to discuss  research *isney was doing  concerning haptics (creating a sense of touch)..and augmented reality via Brain Computer Interface
At first the "Team" at *isney  was glad to share information
until they discovered I was doing a piece not about "the wonderful world of *isney" but  Targeted Individuals
i.e unsolicited human test subjects for brain research (A.I. )
Up until that point to  put it bluntly  I believed  that so called Targeted Individuals were just plain crazy
UNTIL the researchers at *isney "clammed up' ....at the mention of the term
Next I went to Pittsburgh (*isney Research) to talk with a ex employee about his work on Brain Computer Interface
we got along well
and he gave me a lot of information about things I could not believe were possible.
and than he was beaten up .Beaten up so badly he was hospitalized .I am not saying his ex-employer had anything to do with this beating and neither did he .
He  did however tell me he had received a call saying that he was not to speak to me and that-
'My views were Luddite concerning A.I. and- He  (meaning I) had "tricked people" in California into revealing trade secrets

I am not a tricky guy....I write for an Ohio City Paper about  how much I resisted buying Kale
and how very important it is that someone "at least" pretend to wipe down the panel  of a treadmill after use
the  guy who writes
about "perfect day for banana fish "moments in elevators concerning open toe sandals
but Rogue  Reporter? who  tricks lab assistants into revealing trade secrets
-not quite my line.

It was the word "Luddite" that was bizarre..
but more bizarre was that my apartment and car were next broken into several days later
nothing taken but a four year old laptop
and several file folders of saved news articles about such salacious matter as Home Brewing and skinny jeans

You might understand why I was excited to be asked to do a piece on the illegal non consensual  subject human testing .

"You really want to get into this ?"
the guy from *isney research said  "than you sure as sh*t aren't  going to get information asking research scientists about Brain Research and Human Experimentation
Everything one wants done that can't be done gets outsourced
from the very ,very top
to the very lower depths

think about it this way
if you want a ten year old
to jump out of cake
you ain't gonna go to any Travel Agent asking about underage sex tours in Cambodia
are you
chipping someone with bio tech
is white slavery
human trafficking
it's mainly being developed for torture
a type of torture you cannot imagine
You can't go around L.A. or the Silicon Valley asking about nano chipping someone's brain
you can't go asking no software or biotech firm their standards and practices concerning illegal human testing
But -
you yourself  can set yourself up to  become a human experiment

all you have to do is
Join a certain church

and be found a Ruiner

If Neuronautics had not existed  it or something like it would have needed to be created to DO this type of Off Grid Testing..

my finances were low I stilled owed the Group money for my Level 4 studies...on the way back to the hotel where we stayed 6 in a room a man in a Buzz Lightyear costume in front of Grauman's Chinese Theater followed me down an entire block imitating my pace and gait like a mime  .At the intersection I approached wanting very much to get away from the costumed man  he whispered in my ear ,"You're
gonna
need
an ocean
of calamine lotion"
and touched my fore arm with his gloved hand
I felt some thing "lotion-y"
but thought nothing of it so glad was I that "Buzz" had begun walking the opposite direction

Lately it occurs to me that maybe this organization has been used as much as I have so "more legitimized"
"Office of Internal Intent "could steal their methods to use with the "techno"..perhaps it was only natural that a Movement founded upon the principles of Metered, Measured Pseudo Scientific "brain study" would be the "Org" chosen to  do experiments with
this whacked form of wireless communications
Gary Rainy wrote tirelessly of his real or imagined experiences "going telepathic" with some Entity

There was an "inner child" type of Cloak and Dagger One Upsmanship to Neuronautics that often seemed the very point of "the Org's" existence .Their "Military Drag"and comportment of "chain of command "was so very much like the type of role play a child might enjoy playing Cowboys and Indians. Their "Gang "mentality taken right out of some half baked  1950's one reel about juvenile delinquents wanting to "own" the turf and "malt shops" in and around Hollywood and North Hollywood.And again a 1950's old school hatred of
Jews
Homosexuals
Intellectuals and also"Squares "too "unknowing" to 'get the scene "
Images of "Our " leader hung as "icon" like Krishna Elephants in every nook and cranny of the tight "open spaces "of the Annexes and Palaces of Procedural Paperwork .A Pentecostal -like allegiance to a man whose only allegiance was to his own ego .

The rash on Cole's arm had finally gone away..but there was still a trace of red on his forearm where the Buzz Lightyear character in front of Grauman's Chinese Theater had touched hm..and it still itched two weeks later..as Cole had "agreed " to tithe one half of his income he made working at "The Org" -to the "org" which had agreed toset up a payment schedule that wouldonly take 9 % of his take home pay to pay in installments for his Level 2s through 4sCole could not even afford a Dr.for the still itching, strange rashbut than again Neuronautics didn't believe in "doctors"as "Self Rectification" was just one of the mystical rewards ofa Mentored Mind ProgramCole loosened his tie and unbuttoned his dress shirtto better see how his "Self Rectification" was coming alongWhile the swelling had gone downit still itched sometimes like crazyand Cole wonderedif his intermittent scratching if observed by a Mentormight further reduce him toStreet Greeter.Cole removed his notes on his Initiation Period from the Oingo Boingo album they were hidden inCole looked around the apartment to see if anyone hadplaced anymore objects in itor had left any traces of "visitation"Cole slapped his head and realized that his album collectionwould or couldbe a" Tell"as he ,now looking at the room as if he was an Interior Intent Officersuddenly Coley realized he had noturntable to account for the Vinylhe would have to quickly get one......not wanting to use a computer he had handwritten his notes about his experiences as a Neuronautics "inductee"and every other day or so wouldedit them once again freehand....in a separate notebookhidden in Elvis Costello's "Trust"album sleeveCole began editing writing in more readable script-"There was an inner child type of Cloak and Dagger One-upmanship that often seemed to be the very point of the "Org's" existence.when seemingly out of nowherehe clearly heard a Voice saynot quite from outside his head and somehow not quite within his ear"um...I think it might read better if it reads "There IS an inner child type of Cloak and Dagger One-upmanship..Don't you.Cole?" (2)Evan Rainy literally Rolled on the Floor Laughinguntil he got caught up in the wirethat connected his headset to the computerthat transcribed the nano in Cole's nervous system that had finallytranscribed enough of Cole's synaptic signaling to establish a Clear, Comprehendible 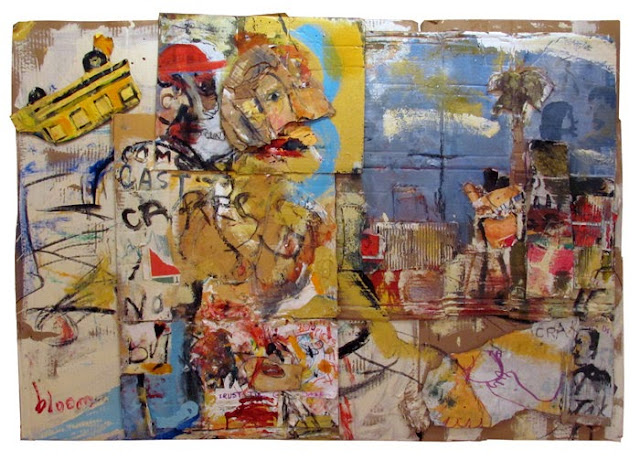