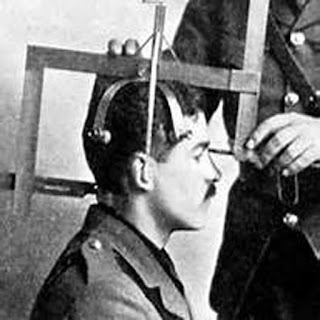 The BRAIN INQUISITION PROJECT is well underway, and as we get faster at decoding neural circuits we get better at categorizing whom amongst us is Good or Bad
by Gina Shroeder

Neuronautics and Neuronautic's founder Gary Rainy might have sounded like a bit of kook back in the 1960's and 1970's talking about Emittance and studying a human's Emit with the See Meter. But now. Not so much. Many outside of the Organization proper might have found Mr. Rainy's "strong arm/tough love" Census Sessions severe but Clearly certain Mind Scientists have not .Many of the key contracts concerning Neuro Decoding and Brain Interface were given to Neuronautics ,according to Franklin Jakes of the Dept. of Interior Intentions ,"Who else but Neuronauts believed not just in the science but also the ideology of judging a man not by his actions but genuine uncensored intentions . Or what Gary Rainy referred to as one's Emit. Or what some simply call brain signal.
For years according to many agencies involved in the BRAIN INQUSITION PROJECT in spite of many obstacles and naysayers Neuronautics and Neuronautics alone has developed not just the tools but the methodology to gage and study neural firing patterns of it's member's in hopes of classifying the member's position on what Mr. Rainy referred to as The Human Scale of Normalcy.
Although the Wheatstone Bridge (or what some call "The See Metter") according to Franklin Jakes ," was definitely low tech in it's mechanisms Gary Rainy was onto something" . Franklin Jakes ,a Level 7 Neuronaut and outspoken supporter of fellow Neuronaut actor Adam Parker's potential run for office in 2020 stated ," Gary Rainy ,once the butt of late night talk shows many now believe to be the founder of Physiologically based " Modern Mind Reading" .
According to Department of Interior Intentions "concerning this and other Brain Map Projects" ONLY Neuronautics has the cache and skills needed to use new Neuro Technology that allows for a genuine Mind to Mind or Mind / Machine Interface . Only those who have gone through the rigors of many years of "tech-less' Mind Grazing techniques are allowed to be Mind Census Mentors .
According to Franklin Jakes all level 5 and beyond Neuronauts are trained at Remote Viewing and really see their chance to "play with" bio sensor speckled headsets that work with biotech introduced into a wide number of "participants' neural tissue as a 'Natural Progression" and mere extension of their genuine telepathy skills to Synthetic Telepathy based Mentoring and remote Neural Monitoring. Most "participants" are purposely unaware of their being made subjects in what Jakes calls "This Fantastic Voyage" for it is very interesting to note what the subject makes of he or she suddenly hearing ,feeling and seeing things out of nowhere from a Sociological perspective. When asked if Franklin Jakes thought he or Neuronautics was doing anything untoward to the unsolicited human subjects Franklin Jakes responded ,"Suppose space aliens with the ability to telepathically communicate with people came down to earth and we didn't know how to fight back?"
According to Gary Rainy, founder of the Neuronautic's movement an un -named "Entity" not of this earth had told him about the eventuality of Brain Computer Interface and telepathy not initiated by 'Celestial beings" during what Gary Rainy referred to as a "Mind Walk" in 1967. According to Gary Rainy it was this celestial Entity who telepathically Imbued Rainy with the core tenants of the Census Session sans Neuro Technology .
During a Census Session a trained Mentor coaches his Mentees in a mind to mind fashion within a small room at a Neuronautics annex without being held back by what Gary Rainy called "The Sentimentalities of Soft-dom". According to Rainy 'Softdom" and empathy with the Mentee inhibit the removal of what Rainy calls Ingrains . According to Gary Rainy only force and psychic driving techniques can be used to get a client /Mentee to open their mind to the type of scrutiny that forces Imprints and Ingrains to exit the client's Emittance/Mind and Body .Sometimes the Ingrains are called Body Seedings. According to Gary Rainy Ingrains may be thought of as either metaphorical or genuine "spiritual sponges" in the Electromagnetic Spectrum that latch upon all Human Organism's as might vermin.
According to Gary Rainy and Neuronautics some people can be Resolved of these Ingrains. According to Gary Rainy Ingrains have been in what he refers to as the Electromagnetic Enway since time itself began. Some people ,according to Gary Rainy ,even after many years of Census Sessions are Unresolvable.
According the Neuronautic's bible "Inway to the Enways ", a national bestseller for over 40 years-hidden within the human race is a species of man that looks and acts as man does but is a subspecies of man (perhaps from another planet or ancient tribe) whose only reason for existing is to telepathically spread what Rainy calls Enrot upon and literally into others,. These subspecies of man according to Gary Rainy should not be thought of as human although they look and act human . Gary Rainy states that often Unresolvable sub species of human latch upon humans of a better kind who are Resolvables ," many -who have worked very hard ,"according to Rainy ," to let go of their Ingrains and Enrot .Enrot ,according to Gary Rainy is to put it simply 'very very bad karma for lack of a better word ...but this word does not do justice to the injustice and sickness of mind this sub species of Human Emits because it is in their Trugenic make up . Rainy claims this "kind" likes to breed with it's Trugenic 'Betters" to infect mankind to the fullest.Gary Rainy who has built a small fortune promoting his brand of salvation says it is and always has been Neuronautics job to rid the world of Unresolvables. Gary Rainy believes all persons are to some degree telepathic and "of course" Emit brain signal into the atmosphere and that thought is energy and "of course " now that the technology is available that signal must be recorded and categorized and classified as Good ,Resolvable and Unresolvable so we can once and for all remove the bad apples from "the Garden".


(2)
Neuronautics is just one participant in the BRAIN INQUISITION
"More than 100 investigators in 15 states and several countries want to understand your dreams ,fears and desires!"
At Caltech, an interdisciplinary team will put fruit flies on treadmills and assault them with a variety of sights and smells while recording the activities of individual neurons. At Princeton University, a team aided by thousands of volunteers playing an online game called "Eyewire" will thoroughly map how light is transformed into nerve signals by the circuits of the human retina. At the Salk Institute, scientists will turn genes on and off in the mouse frontal cortex to understand the functions of certain cells that reside in the seat of higher reasoning.

Developing more powerful and less invasive ways to watch the brain at work will be on several institutions' newly funded agendas. At Duke Univesity, new brain-scanning technology will home in on electromagnetic signals broadcast by neurons. At the University of Minnesota, researchers will use smaller magnets to create a more portable, cheaper version of magnetic resonance imaging. And at West Virginia University, researchers will engineer a wearable PET scanner that images activity in the human brain in motion –- for example, while a subject takes a walk in the park.


At several research centers, scientists will develop and test new lasers, light-emitting probes and infrared chemical tags to prompt and track neuronal activity throughout the brain. Their efforts are expected to capture communication among neurons in finer detail than has ever been seen. They will allow neuroscientists to listen to brain cells' electrical activity at depths too great for current technology to detect. And they will more precisely characterize the flow of information among circuits -- clusters of far-flung brain regions that must work together to govern such functions as memory, attention, movement and sensory perception.
"We’ve only just scratched the surface" in understanding how the brain works, or fails to work when under attack by disease or injury, said Dr. Francis Collins, director of the National Institutes of Health. “There’s a big gap between what we want to do in brain research and the technologies available to make exploration possible. These initial awards are part of a 12-year scientific plan focused on developing the tools and technologies needed to make the next leap in understanding the brain."
Two UCLA teams won grants of $1.9 million and $2 million that will develop new brain-mapping computer programs, characterize the brain's vast population of cell types, and develop a "parts list" that will help illuminate the process by which cells organize themselves into circuits.
"UCLA benefits from a long-standing culture of interdisciplinary research,” said professor Kelsey Martin, chair of UCLA neuroscience. “Engineers collaborate with neurologists; psychiatrists work with biochemists. The close proximity of UCLA’s medical enterprise to engineering, basic sciences, nanoscience and social sciences — an asset that few other research universities can claim — is a major boon when it comes to encouraging faculty to work together.”
Posted by vvvvv at 2:53 AM