they stopped calling me Dumbo..they will give me a new name so I don't regress..i graph that i like the name Reggie 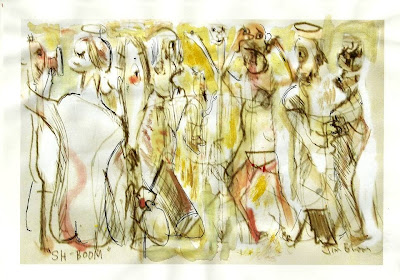 I browse through
Gary Rainy's first book-" Inway to Enway"
I keep a copy of it under
my bed.
the cover page is burned.
I get angry at Neuronuats
and have thrown many
copies either across the room
or in the trash
they
treat' Inway to The Enway"
like it's the Koran  or something
it's unreadable
but Gary wrote not so it would be read
but GLEANED
I cannot explain it better
but sometimes I page through it
trying to find a dollop of sense
I correct my thoughts.
this glib way I have used as a defense
that has become an inadvertent shield
to not let Good energy in.
in fact there is an awful lot sense to it
I rag on "inway" like it's  Mein Kamf
but Gary Rainy subdued many of his initial presupposition
he was a reasonable man
and was raised in the 50's
and confessed he took along all the baggage of his times and HIS childhood
and of course those notions were
in the first addition
Gary stated that he was quite young and quite foolish when he wrote the initial text
the more he learned about himself and science the more
"laid back"he became towards
mankind..
although, he stated ,A Ruiner will always Ruin ..it is in his nature..
but even Ruiners can play a part
if they
accept their tendencies and try to
confess
these faults first to them selves
and than to a higher up
who might also have had" ruinatious"
preoccupations before they themselves were
impressed upon by a Bettor
one cannot get Bettor without first accepting that some people in the world are better than you
for instance I cannot shoot a basket like an NBA player
but perhaps I can study his techniques and
become a better shot
I am not as handsome as my favorite movie star but if I get a good haircut and use weights
I will be better than I am now.and so on
I am not a very good person
but if I realize I am not
and "hang around " people who ARE
some of their traits might rub off on me
my first mentor was Susan
she gave me the kinship bracelet
Susan mentored me through my initial
sessions
and persuaded me to hang in there
it's a rough program
based  on
replenishing or finding one's
psychic energies
both the Good
and the Bad
that build up in us all
for instance all the worry and anxiety
your mother experienced
in the womb became part of you
like wise
our DNA and genetic make up have been passed down
through years and years
we still retain Neanderthal traits
that simply do not "go" with
being the best type of person one can be
there are metaphors galore for this
removal of traits we do not need
and now there are quicker ways around
self betterment
Gary Rainy always believed that man was evolving
and thought
of man something like a bonsai tree that needed stilts and
guidance to
become
more
than it might have been
a Ruiner
would say "Hey stop pruning that bonsai tree.quit toying with it"
a Bettor would say
stay away from my Garden
stay away from my tree
.............................................................................................................................................''''''''''