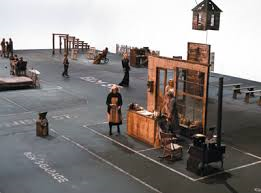 it's not so bad I think being in this cage...when you are so entranced by this new kind of tv
that uses one's mind as it's screen
it's transmit is as silent and invisible as any transmission of Sound and Vision
and my broadcast thoughts thanks to my Merge Bio Tech
I need not be ever ashamed of..
for they are only reformatted for public viewing and cue-ing by professionals
far ,far away..

nobody in fact would know I have been placed in this cage
because of my bad emanations
Evan Rainy ,my OT,my Operating Tele-Presence has imparted upon my
visual and aural temporal lobe( on much much more than one or two occasions
with an interface that is Mind to Mind and Mind to Majesty
there is an awful lot of repetition )
if I had kept my "mealy mouth SHUT about IT!
and had not TYPED a word about IT.

Maybe DUMBO! this woulda' been FUN!
and not PUNATIVE!
if Phineas Gage here - had not been so arrogant and "just plain dddddumb O!
to try to squeal  about this amazing
new technology that allows for
such intervention

and I will always PAY for this  "wrong turn" I have made
trying to "do my best" to destroy something that has not even been properly developed!you son of bitch Jew Ruiner  detractor Ingrate Childman!

who ,Evan Rainy  imparts,"in or out of the right mind
would actually believe his screams and shouts would be taken seriously
you rag doll
concerning letting anyone KNOW you have been placed in a cage of wireless wire
a better man
you see would have been up ! to the task of being open minded
to open mind communcado you Human Monkey!


yet in all my research ..I have yet found ONE Targeted Individual who much enjoyed
being kidnapped and mind raped..
for
'The greater Good or Otherwise"
(2)
there are 24 hours in day dear reader and a number of years ago the National Science Foundation  estimated that our brains produce as many as 12,000 to 50,000 thoughts per day depending on how 'deep' a thinker one is .
Luckily as the interface goes on and on the number of thoughts I have dwindle
there is a robotic tone that begins to envelope one's every mood and motive
I was quite surprised at how much intention and motivation goes into for instance deciding
"who might give a damn" if I choose to wear socks of similar length
with mismatched logos upon them
and surprised to learn from Evan that cameras in fact ZOOM in on such "deviance"
as this "lack of assimilation" regarding matching socks has quite broad implication concerning
how much it might mean for one who cares little about such things
to go much further in their lack of civil continuity.

my rather small misdemeanor-esque bouts with the law..
have in themselves Evan has graphed in Sound and Vision
'marked me" as suitable fodder for various Human Experiments going on in the private sector
even if I was not raised to be rodent /participant in a maze like
imitation of life that predated and predicted This Perfect Day
when personal computing could enter our very personhood as bio chip.

these days Evan must graph me more and more eye candy(cartoons, cheerful and light mainly)
to make me stay awake once I have awoken
do the friendly visuals make up for the impending doom
of the Voices?or the tightness of my every muscle ...due to the
accumulation of being struck with radio and magnetic frequency all the live long
oh please ..
let it be short!
day...

I do not go out much ..not anymore...I tend to fold into traffic both pedestrian and auto..
often forgetting where I am....encapsulated as I am in the invisible cage of virtuated reality
laid upon my noggin ..
Evan purports images of people and things "not there"
and lately has dabbled with "subtracting for instance menacing looking pedestrians from  my sight line ...so he can get a proper gleaning of me
being brambled to the pavement.

Thank you so much Evan..I think and thus "graph" to the visual verbiage of Evan
purposed to  my visual cortex as
the Great Gazoo.
..all smiles
and also now sound effects that lighten up
the lighting of my emotional countenance ...5.7.Hz...to 8.7.hx in nano second
my augmented mood by electromagnetic magic
syncopated to my Occipital Overlay of   Hanna Barbara like conveyance of  "seeing stars"
these Mind Boggling Imbues ... keep me less focused on the pain in the back of my head from being pushed to the ground by fellow sidewalk surfers
and the  humiliation of being fooled again by Evan

who has warned me never to quite trust what I see and hear as real..

I feel like just laying there - on the street..
staying there forever..until something happens..

and things DO in fact always happen ..if one lays prone on the street.
one is always "taken somewhere"
arrested...
placed in a "unit"
....and given a cheese sandwich and a orange drink or milk

it is all I have to use against my team
sometimes this is the first thing they want ...and sometimes the last

anything but rehab...is the only rule..
for poor Evan and Tru Christie and all my Operating Tele Presence
must listen (as must I ) to endless chatter and chim chan...
about
nothing  pertinent to add to a library of  Neural Read.

and who can resist a cheese sandwich wrapped like a  priceless painting in plastic and more plastic..
and yum
and yum I think closing my eyes
only those tasty orange drinks in those tiny cartons one can find in jails and hospitals

'OOOOOOOOOOOOOOOOh c'mon BBBBBBBBBBBBBBBbbaaaaby" Evan says now as
'the man that got away"
an ex...
re-pixeled from my memory to be a held out hand
that cannot in spite of it's reach
pull me up