no country for "Man-ed" Men

one realizes that in spite of being a victim
every day one who has been made a Human Guinea Pig.. 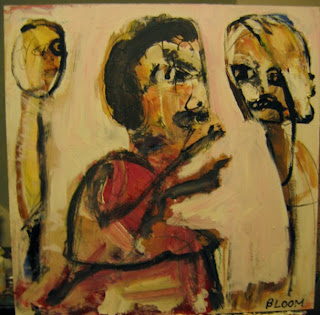 is in some ways a perp
because one is aware one's unsolicited participation in this horror..show.
(I ask you dear reader why on earth anybody would write about this endlessly foregoing a protection of copywrite ?)
if "something funny was going on"?
I presume if a reader dismisses the 'experimental novel" aspects of writing about A.I. testing
quite logically one must assume ..the narrator who hears and sees things...and is convinced he has been "reformatted biologically" to think towards an "entity" technological or research oriented in nature.
naturally ..is not "sane"
however whatever thought disorder you might presume I have I have rather purposely
attempted to negotiate..in the style I write this..
which If read in it's correct order lacks the hallmark of disorganized thought that is the secondary symptomology of schizophrenia.
also I have intentionally added bits of humor...to this situation that is anything but to add "affect" to many of the character...a dimension of 'Thought Style" equally lacking in most thought disorders..
what I often believe is that a reader might be able to understand ..the "truth" of synthetic telepathy..which has been written about ..dare I say boasted of ..as "the latest thing" created to
"win" in combat situations.
I often think a reader has a much harder time wrapping their mind around the concept of Human Testing being allowed to take place in these times..in this country that prides itself on being
"beyond such abominations"
yet this country .which I can in no way honestly say I am a citizen of.
(I am not..nor would ever like to be ..again nor ever)
has a very long history of doing horrible things "in the name of the greater good" to it's own citizens