LOS ALAMOS, New Mexico --
Directed-energy weapons take the form of lasers, high-powered microwaves, and particle beams. Their adoption for ground, air, sea, and space warfare depends on using the electromagnetic spectrum
After more than two decades of research, the United States is on the verge of deploying a new generation of weapons that discharge beams of energy, such as the Airborne Laser, the Active Denial System, as well as the Tactical High Energy Laser (THEL).
"History has shown that, without investment in high-technology, fighting the next war will be done using the last war type of technique," Dr.Douglas Beason said, " Putting money into basic and long-range research is critical.

Though considerable work has been done on lasers, high-power microwaves, and other directed-energy technologies, weaponization is still an ongoing process.
For instance the Tactical High Energy Laser (THEL) reimagined as-a non-lethal way to use millimeter-wave electromagnetic energy to stop, deter, and turn back an advancing adversary. This technology, supported by the U.S. Marines, uses a beam of millimeter waves to heat a foe's skin, causing severe pain without damage, and making the adversary flee the scene.

Beam distance-to-target , ease-of-operation Directed-Energy Technologies offer a range of applications, from demobilizing  an enemy's electronics to performing remote surgical strikes on an enemy's nervous system .
Beason said," that one "hand's off" advancement  concerns ' Voice from God 'technology, which by manipulating the world's own  ionosphere, one  can create audible frequencies- Like some boom box in the sky, the laser-produced voice  bellows from above down to the target below: "Put down your weapons."


Late last year, speaking before the Heritage Foundation in Washington, D.C., Beason told his audience that laser energy, the power sources, beam control, as well as knowledge about how laser beams interact with Earth's atmosphere are quite mature. The technology is ready to shift into front line warfare status.
"The good news is that directed-energy exists. Directed-energy is being tested and within a few years directed-energy is going to be deployed upon the battlefield," Beason reported. "But the bad news is that acquisition policies right now in this nation are one more geared toward archaic  practices rather than revolutionary practices."
"Visionaries win wars...and not bureaucrats. We've seen this through history," Beason observed.


One of the most life altering experiences that one does not often touch upon nor think about is the physical changes over a life time or segment of one's lifetime that occur concerning what one looks like .The changes the occur to one's "looks" are gradual ,the "glow of youth "fades into "the ravages of time" in a manner that one perceives not only as inevitable but  because of the "way" a human mind interprets "time "nearly imperceptible except when the human organism might "study" photographs of themselves 'in their prime", Even than any shock to the system in terms of dichotomy concerning how one looks now and how one looked than is not visceral, in the way it would be if the human organism 's face changed before their eyes if '16 going on 17  " was mirrored literally back at the human organism as "16 going on 86"  .While a former beauty queen or male model might lament at looking at photos of themselves in their 20's or 30's upon seeing their reflection in the "looking glass" at  70..the feeling one might get may be disconcerting but not ,as a rule terrifying .The human mind  is very good at parlaying the natural  changes that occur with  time, especially because time has a  rather all embracing effect on the human mind   and thusly  the limitations of what one does when one is older and how one looks when one is older. In most cases what one thinks of "faded beauty "is tied seamlessly with  life altering experience and organic alterations in the brain itself .But this tally of one's physical attributes is not such a seamless observation for an individual who has been inflicted with a sudden condition that causes  facial disfigurement. Previously pre-scripted  events that could precipitate extreme and very noticeable alterations in a human orgasm(certain gases for instances dispersed in the air, certain diseases known to cause either irreversible or irreversible diseases whose hallmark is disfigurement) the problem with using certain biological and nerve agents to trigger disfigurement upon others was and is that the means of creating aesthetic facial trauma inevitably would cause trauma to the entire biological target's system, thus making the use of reversible methods of disfigurement ineffective to introduce the notion of "compliance  or capitulation" based  "deal making "or :amendments to one's actions so one's disfigurement could be rescinded if the target of such alteration "gives in to the demands a purveyor of such technology. Based upon persuasive "deal making ' via "The I Got Your Nose "reality of this Hand's Off mechanism to sustain peace by any means at their disposal . Disfigurement via Psychotronic Direct Energy that could ,for instance instill  upon a populace or small number of people in the populace a stern reinforcement that emphasizes  the notion that -"if  one's interior  visage to the  system of governance( and the social  control  this governing body  must beset on the "masses") is not cast  a certain way than alteration of  one's physical  visage might remind the dissident of "how monstrous "their cadence appears  not only metaphorically but figuratively

In the early 1950's while practicing using radio waves  to imbue  extreme low frequency imbue upon  a human organism so a deviant  might be cured of mental illness,personality disorder or criminal thought styles by  remotely and electronically being enticed and entrained   to 'listen' to  words and thus ideas that might  derail the subject's inner monologue away from diseased thinking toward less diseased  ideations  by Extreme Low Frequency directives that could enter a subject's mind   not through their ears but rather through their bone conductive nerve and thus auditory cortex a rather interesting side effect was noticed regarded stiffening and shortening of a subject's  facial nerves now 'hit" by directed energy causing the subject's visage /appearance to be almost monstrously reconfigured. Researchers noticed that often the subject's  desire for their countenance to be "left alone" the subject would be less resistant to a more exacting initiation of Silent Sound (Voice to Skull) that cause  less pronounced strain upon the subject's 3rd 4th and 5th facial nerve. The photographs of these subjects being temporarily disfigured by directed energy have been redacted from their previous assessment as Unclassified at this time 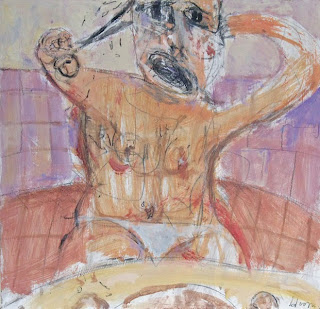 Human disfigurement or the threat thereof has throughout history been an excellent means of keeping "populace" in tow. As one's looks are an often overlooked weapon certain  individuals (and dissidents, subversives  etc use to influence  society with diseased thinking) ,many a criminal or those with criminal minds would never have gotten as far as they may have in their purpose to   instill in other's their own  'sick" point of view concerning politics or hearsay concerning "world affairs" If the charisma that "looks" often propagate might be corralled  or destroyed* many an ill mind would not have the "framework" to influence others to "be like them' IF their outer appearance FIT their INNER WORKINGS.The 'rebel" long hair with the dreamy check bones could not and would not influence "a potential riot" against the state IF this "rebel's" face was swollen 3 sizes too large via direct energy tapping the "dreamboat long hair's" adrenal gland that would and could promote the Acromegaly Now let us consider the deviant whose appearance has been altered temporarily. Or the potential terrorist who after months of interrogation strategies "still refuses" to "give up valuable information"?

What of the loan wolf ? The .self righteous siren who comes face to face with their face "on Direct Energy"? How quickly one's intrinsic instinct that "it might be better to be dead" than live one's life looking monstrous...especially when there is a time table concerning the reversibility of the "permanence of one's appearance..-Brandon Bengele'  Face the Face" The Institute of Social Systematics (2009)
Posted by vvvvv at 12:59 PM