a gift to The Lessors 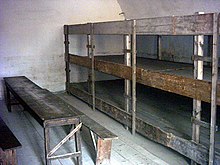 Cell
Main article: Theresienstadt (film)
Late in the war, after D-Day and the invasion of Normandy, the Nazis permitted representatives from the Danish Red Cross and the International Red Cross to visit Theresienstadt in order to dispel rumours about the extermination camps. The commission that visited on June 23, 1944, included E. Juel-Henningsen, the head physician at the Danish Ministry of Health, and Franz Hvass, the top civil servant at the Danish Foreign Ministry. Dr. Paul Eppstein was instructed by the SS to appear in the role of the mayor of Theresienstadt.[30]
Weeks of preparation preceded the visit. The area was cleaned up, and the Nazis deported many Jews to Auschwitz to minimise the appearance of overcrowding in Theresienstadt. Also deported in these actions were most of the Czechoslovak workers assigned to "Operation Embellishment". The Nazis directed the building of fake shops and cafés to imply that the Jews lived in relative comfort.
The Danes whom the Red Cross visited lived in freshly painted rooms, not more than three in a room. Rooms viewed may have included the homes of the "prominent" Jews of Theresienstadt, who were afforded the special privilege of having as few as two occupants to a room.[15]The guests attended a performance of a children's opera, Brundibár, which was written by inmate Hans Krása.
The Red Cross representatives were conducted on a tour following a predetermined path designated by a red line on a map. The representatives apparently did not attempt to divert from the tour route on which they were led by the Germans, who posed questions to the Jewish residents along the way. If the representatives asked residents questions directly, they were ignored, in accordance with the Germans' instructions to the residents prior to the tour. Despite this, the Red Cross apparently formed a positive impression of the town.[15]
Following the successful use of Theresienstadt as a supposed model internment camp during the Red Cross visit, the Nazis decided to make a propaganda film there. It was directed by Jewish prisoner Kurt Gerron, an experienced director and actor; he had appeared with Marlene Dietrich in The Blue Angel. Shooting took eleven days, starting September 1, 1944.[31] After the film was completed, the director and most of the cast were deported to Auschwitz. Gerron was murdered by gas chamber on October 28, 1944.[32]
The film was intended to show how well the Jews were living under the purportedly benevolent protection of the Third Reich. If taken at face value, it documents the Jews of Theresienstadt living a relatively comfortable existence within a thriving cultural centre and functioning successfully during the hardships of World War II. They had to comply and perform according to Nazi orders. Often called The Führer Gives a Village to the Jews, the correct name of the film is Theresienstadt. Ein Dokumentarfilm aus dem jüdischen Siedlungsgebiet ("Terezin: A Documentary Film of the Jewish Resettlement").[a] As the film was not completed until near the end of the war, it was never distributed as intended, although a few screenings were held. Most of the film was destroyed, but some footage has survived.