What of the Ruiner who was once a Neuronaut and chooses to go against The New Way? This kind of Ruiner is the worst kind as he or she was given the opportunity to break the cycle of their Emttance as Lessor by he or she's Bettors.
The is the type of Ruiner who will claim his participation with The New Way was involuntary . 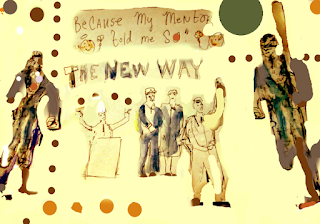 This is the type of Ruiner will no doubt claim that Neuronautics is a front for some agency.
This type of Ruiner rarely says a word about their Mentorship that is not peppered with false witness. This type of Ruiner is so ill of mind he knows not what he or she has witnessed.
This type of Ruiners must often be placed in restraint or institutionalized not only for his or her own good but for the sake of  others.
The ex -Neuronaut never mentions his or her initial enthusiasm at being Mentored in a unique way that speeds up the work of clearing the Mentee of various Emblematics that have latched upon his or her "Beingship".
Now the Ruiner only can cry "Foul" and Human Experimentation.
The ex- Neuronaut now sees himself or herself as a target.
What of the Ruiner who partook of "The New Way" and decided he or she's Old Way  was  and is where not only they but everyone must remain?
First we must ask ourselves why a  practicing Neuronaut left "The New Way"as the Ruiner seldom mentions the real reasons .
Nor does the Ruiner mention that he or she who attempts to leave the program  has stolen from the program all he or she could take from it.
Ruiners give nothing back, it is beyond their capacity.
Ruiners are riddled with Latch Upons as is any vermin .
Ruiners are taught that Latch Upons are the trouble for all the ills of the human species and that only mind decoding technology can free Latch Upons from the universe.
The Ruiner care nothing about he or she's species much less the universe except to spread their latch Upons to others.
Posted by vvvvv at 5:46 PM