there's a feeling from EVAN ,my intracranial mentor
his pitch,the frequency and pulsations and familiar tone are that I must not go on.,..
that we discussed this...
and my punishments will only add up...
he seems almost buoyant
EVAN has gotten me in more trouble than I care or "dare" mention..

his tone .a warning...
makes me
want to type...I know what he and my Group want me to appear as...
presumably what I have written in the last few
entries over a week or so ago
were just "mad" enough to be "just right"..
meaning "the style of post"is just the type of one who has lost his mind and may in someone be "dangerous"
if I remember correctly there are 4 or so brief jottings concerning a deliberately strict/loveless methodological childhood..
all the better to be riddled with imprints and referentia's ..no matter that they were induced into me decades and decades ago
to "go" with the "inserts" or what a fool such as yourself dear reader might call "chips"
teeny tiny particles un-seeable to the naked eye..that were subcutaneously placed in my
I should say "our" bloodstream"
I am not a man running on my own devices
no sir indeed.
all of this is explained you see in other jottings
a Blog ..such a horrible form of expression is read unfortunately backward
and in this way only adds to the schizophrenic non linear style of thought I unfortunately;

have grown accustomed to
intraneural interface
MIND mind to mind
communication is not for the squeamish
when I squeam
I fall back on all sorts of habits
....
but let's forget about habits
and get back to my strange habititat
that was
HOME
that was
my early years
my childhood..

please do not think too harshly of my stand ins
their role you see was only "to play act"
their custodial roles..
the reason for this being that with neither a mother or father to connect to ,bond with
a ward such as myself
had to seek out
whatever was in his present surroundings

for instance
The TV set
which functioned not only as a familiar bond...of warmth (that smell ,that heat of the the dust being heated by the cathode ray..heavenly
full of ozone .a 3 atom instead of the usual 2 moleculation caused by the rather high voltage of the cathode tube and the still dusty air it disturbed..
perfect
the box of light and darkness
for it's use as incendiary device
to light up the synapses to
cue,referential symbiotic sway.


earlier that evening
now in my forties
this figure of a man  in his late 50's
on point to remind me
of something
yet at first
I did not know what...
yet he seemed "placed"
a "placed" man is usually placed to stimulate recall of some time or event..
a man in a 3 piece suit in 74 degree weather
slowly eating an ice cream cone.
in an odd manner nibbling at the cone so a small cascade of white liquid dripped down the sides of his lips..
at first I assumed THIS was the cue..
the point of reference whether I wanted to or not that would effect my next week
but than I caught a whiff of the man.
the whiff of a cologne or aftershave
which smelled like cathode ray burning dust particles.
I had to assume the 3 pieced man noticed my sniffing
you see the sniffing and and over all demeanor of a minimal brain function type like myself is
an obvious
emotive response
a minimal brain function sort raised on  relegated parental system-ology
cannot be discrete .
it is not in his nature
or mannerisms
in fact this lack of buffer...or censor
makes
a "intraneural interfacing man like myself
an easy spot to "placed men" who know that
one such as myself is not simply in private reverie but in constant contact with
a Mentor

I wonder aloud..
and when I say wonder  aloud
I mean that YOU might not hear my thoughts
but EVAN ,my mentor and my Group certainly
"hmm  I did not know they made such cologne that smells of cathode ray burning ozone and dusty air..

noticing my gaze (I get no feedback from EVAN not even a SHUT UP Dumbo"
the seemingly "placed man" says rather softly ,so only I (and of course  my Mentors) can hear

The man tells me I am on the right track 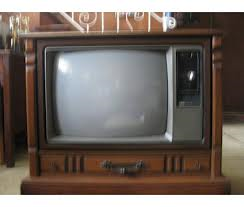 but takes me by surprise  when he makes direct eye contact

"but..
People on the RIGHT TRACK often
end up
tied to a track Penelope Pitstop style
Minus 3 Deviant Types such as yourself might find it best to keep some bits and pieces to oneself..
and maybe lay off once more the inhaled stimulants for a time
there is nothing duller than a hysteric doomsday scenarist...writing about things he has such a small part in..
I take a whopping sniff of the man's cologne although I vaguely realize this might put the placed man "off"

luckily he smiles.
There is nothing like the smell of 1977 RCA color TV is there..once it's been on a bit is there?

The placed man quickly walks away takes the last bite of his ice cream cone..

taking note..
I walk home myself.all but forgetting where I was going to begin with..
I walk home seeing the world in 1977 RCA reads,greens and blues
Posted by vvvvv at 3:42 PM