"i am supposed to be in the hospital

that's how it works

not to get better..
simply to have my nicotine monitored.

in a loony bin you smoke one an hour,,

these "A Cain in the Woods" Men 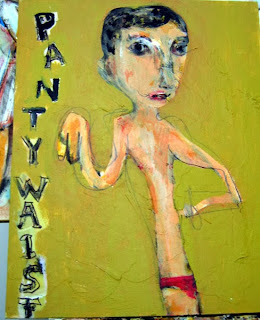 of Science..
only see
my life
as a warehouse

..the fact that i snuck away (my name was on no lease...)and for 7 years painted.
caught them off guard..

..THIS is the guy we drugged
and tinkered with in 94 and 1995...
i assumed they came to the conclusion I had gone stark raving from all the neuroleptics etc they shot me up with

that WHAT EVER WAS LEFT OF MY MIND WAS USELESS FOR further TESTS...
SOME how they ...knew just what would bring me back to LA
introduced me to a nice "fella"
"I really like your work...The Studio might like to see what ..or how an outsider artist might write ...a movie...come out to LA...i will find you an apartment..

....these guys know what they're doing

an entire new "packet " of memories has opened up as if my mind is an excavation site..This is Brain mapping ,,which begins in earnest of In the Grid 2014...

experiments will never be told..

trust me
we dont stick around long
we disappear...

the men in black slacks
are
REAL MEN
disgruntled


yes..
disgruntled real men who previously had jobs
in "certain " agencies
some times wind up working
in bowling shirts and 5 day beards.
they nestle themselves in bug infested run down motels
and bug the room of the bug eyes junkies and drop outs who wind up there and EAT them ALIVE with
all manner of
Mind Augmenting "toys"
in the 60's these fun guys ..played with hallucinatory drugs..
now it's nano and bio sensored hairnets.

these are real men
who hate anyone not like themselves

homosexuals
they despise the most
but do not mind
getting deep inside them
with
mind reading equipment," He said

real angels real magic
this political?
Angels
Guides
to take one safely back and forth

he has spread all sorts of lies and stories about me ...everybody knows his side of the story

he will make sure NO ONE EVER
KNOWS mine

Neuronautics I explain
doesn't Take in
disgruntled
ex this and that
because anything This and That is all Neuronautics wants to keep as far away from as possible..

but only to
glean ideas from
Gary Rainy was always aware that
this Type
once assiliated with THEM
usually return to THEM
afraid of the New Way's
...
fundamnetal refusal to be bought or sold or swayed