Steerage and the man who would be "king"


Valerie met Adam Parker at Steerage.
Steerage,  the new restaurant that catered to the Headset crowd. 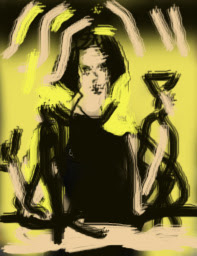 a fine restaurant
if one didn't mind the box turtles that were allowed to wander the floor.
the place reeked of them.
clearly someone had paid off a few health inspectors
for "the show'

the one rule of the guests was that if a box turtle
landed on it's back, one could not flip it over.
and because there was alot of foot traffic.
there were quite a few
"upside down" turtles on the floor.


"Evan Rainy  tells me you've been presenting yourself  with OT Tele --Presence to a Level 2  "participant" as that girl with her thumb up at Abugraib  Prison "the girl with a pony tail ,smiling in front of the prisoners in those awful  photos"Valerie said ,digging the last bits of meat out of a lobster claw.
" My word ,LA really  IS a small town isn't it"...one can't do anything FUN without some Proxy yacking about it"Adam said ,kicking a small  turtle across the room.

"Watch out Adam or you may end up like Jacob...managing some overpriced kitchy Soup Kitchen in North Hollywood"Valerie giggled
Posted by vvvvv at 8:45 PM