"Safetly in Umber" was an old tv movie that Valerie Prentis produced when she was 22.
when she and Gary Rainy were undeterred "setting referentials"
and the Rainy Method
as touchstones and stanzas in Allience Pictures' lexicon and film library

very subtle
and for all to enjoy
only" rainy day people" would get the extra reinforcement,like a pat on the back .a peck on the cheek from a mentor

films like "Safety in Umber" and "The Pineapple War"
movies found questionable during the hearings
the hearings that forced Alliance Pictures  to cease and desist..
"to stop,"
as the judge mockingly put it"
putting anymore Enway into OUR airways"


Rainy said it was important to "think like THEM"
and she had a keen mind for it.as she was previously a THEM herself who only saw the New Way and Gary Rainy as a Demagogue

as if.
As if this was better?

it was 31 years later...and here she was driving through century city with Adam looking at the billboards.

the media
a common mind

but what was this mind about
she looked at Adam.she had read some of his neurals and was getting a jist.
still.He stood a chance.
if he passed.
the tests......

"winning?"she supposed
winning what
so instead of thought out specific imprints and a shared vision of a group sensibilty  of vision  almost biblical in it's designs by Rainy
and Alliance Pictures(now Parasol Pictures)
it was about
being wealthy,young and loud?
it wasnt just her and Gary's generation that wanted something mystical
she wasnt just old
and it amused her that people thought of mysticism as something flighty and weak
so they put a suit on it and put some money in it's hand
and than they thought of it as sinister.
or silly
"if they only fuckin knew"Valerie thought.
and in this reverie that Valerie knew never lasted..she wished
she  had been "app-ed" and that a TRUE something
could actually HEAR and RECORD her glorious thoughts

.."everyone was so bogged down in the  technology of it and the negativity of it..especially those with something to hide cared so much about "Merge' ,about "apps""Valerie thought
and because she wanted
at least "some" bit of her feeling and senses "caught"
she thought ,to hell with my hair .to hell with how damn silly one looked wearing "wearable Merge headset"
I want this day saved for posterity.

Valerie made a gesture for Adam to place a spare headset upon his temples and skull.
Valerie knew Adam felt scared.
as one almost automatically "thought in Tourette's " about whomever ---one was with ...
a ball bug approach
to"mind reading' still being ,at least perceived as too -intrusive

'Don't worry Adam..I know the first thing I will read is that my pores are too large ..that I dress too young..baby..it's how Merge works.."

the means to an end and a new beginning
symbols, some clear and transparent cues
and an old fashioned mastery of one's thoughts and impulses
and how one's thoughts affected others
a hierarchy of respect of mentors was seen as demagogary?
or controlling?

it was taken as hostile and militaristic
but if that's what it took to make people into their true selves.and strong enough to fight for it
who gave a damn


the Enway rose up
like a cloud above los angeles ..it was in the warm california air..
and new language
whether they called it Rainy or not.. 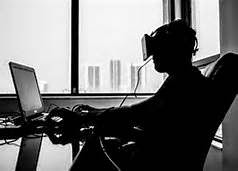 A large gift basket and two presents wrapped in black paper ,tied in red and bowed with a  white ribbon sat atop Adam Parker's newspaper outside his front door. Opening the  smaller box Adam removed a first edition of Henry Ford Senior's - 'The International Jew" .Tucked inside the gift basket of  Godiva chocolates was small vial of something marked 3-Quinuclidinyl benzilate , the words half scribbled out with pink nail polished  to make room for the words "BZ"written in caps with a Sharpie and three bottles of Nembutal with a half scratched out name (Mandy something something )  .....  In the larger box that Adam opened were 2 pairs of Simon Miller distressed jeans 3 sizes to large  for him.....the note attached  simply read "eat it up,drink it up... my handsome Prince...Inside the book Valerie had written in red pen"When we get through with the Hinky Dink there won’t be a Ruiner out there who will dare raise his head,his pen or his detraction in public."

not so easy
a simple unbuffered ,"Hello" without extraneous bbburrrrr
of anything else that happened to be on your mind  at any given moment
"hellos aside"  immediately Mandy received a Direct Neural interface of  a hostility that was so severe in it's intensity toward/IN Mandy's nervous system that she all but fell out of her chair..

Frightened and  uncomfortably  heightened
Mandy
tore the headset off her skull  and watched it  tumble  to the floor , instinctively backing  away from Linda's "postal"  brain waves
that  were now being safely  absorbed by  the beige synthetic fibers in the  Berber carpet that lined the entirety of Merge's Palo Alto office complex.

Mandy knew she would have to get back to Linda on headset eventually
but the anger in Linda's about “some Ruiner who had evidently sold Merge's nano for a  little game called Pieces that  Independent "clients" played on Merge's bevy of "apped" Proxy.
The inserted "apps" made the Proxy "open minded" to all matter of Mind/Mind interface and back and forth Immersive Reality "rundowns.but while the special client who paid up to 12 million dollars to commandeer a "husk"
the Proxy ,implanted with nanotube transistors could not stop nor control the interface  which was ,of course part of "the fun"

Linda N. thought towards the Berber carpet ,unaware Mandy had removed her headset
" yes Mandy ,it's now online... that Thing  everyone knows about  but  dare not  speak  it's name this  information has ended up on some online message board whose sole purpose seemed to be about contaminating the Neuronautic Method.,"Linda graphed at the synthetic carpet fibers with no reply,Linda stopped her theta waves long enough to look up at her laptop to notice no Mandy-ish brain activity

Mandy stood over the headset, wringing her hands ,shaking her head back and forth ,back and forth,panicked not because of the lingering  tremor of Linda's emotional neural onslaught
but because it was she
who sold Reggie Grath,The MC of The Community Theater(a Hate Group with a conscious) seven nanotube transmiiters last spring
when she was dating Reggie,  a dreamy construction worker who was working at ProxyCyber in exchange of a  promised 3 hour interface with a future”Piece”(some jew...no..make it some jew homo,Reggie asked)

Reggie persuaded Mandy to "go to any length "to sneak just one ,just one, little insert out of ProxyCyber Labs.
And she did.
Mandy shook her head back and forth ,back and forth making herself think of random objects around the office,which was the equivalent of counting sheep to hide and scramble thoughts during intraneurall conferencing

.Finally Mandy picked up the headset ,deliberately keeping her mind humming with an old Dr Pepper jingle she remembered her  father singing while shaving
“Are you On something Mandy?Are you out of your mind?. Focus," Linda urged
but in one brief synaptic storm every bit of betrayal ,real or imagined Mandy had ever committed  flooded Linda N.'s cerebellum 400 miles away

as a sort of emoticom
Linda sent via headset a contextual overlay of her Cheshire Cat to parlay her conceptual countenance
to Stevie...


.Linda couldn't wait to  "remotely morph "Pretty Mandy's face, which would soon be permanently embedded with millions and millions of tiny shape shifting  nano bots that could and would make Pretty Mandy instantly “the ugliest woman in the world"-and back again and this way and that way and this way and that-  all  at the touch of a button that Linda could almost feel in the palm of her hand .The remote that would control " Mandy's facial nerves ,nasal dimensions ,cheekbones and everything else in  within the range of"The Reigns "