the taking of Kimmie one,two,three 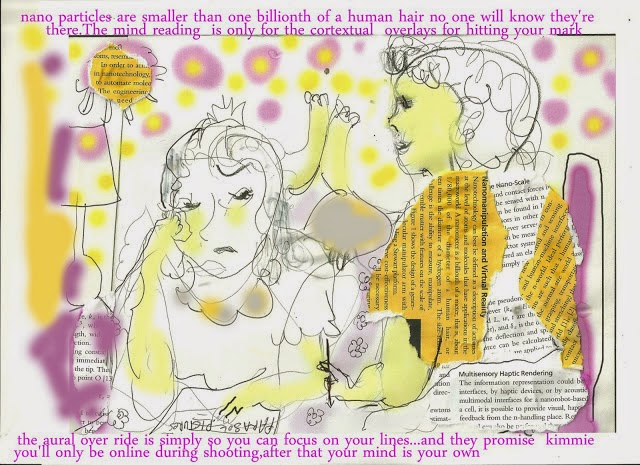 (that sticky tape ,those Xs on the studio floor ..soon a thing of the past ,so bad for the environment,so difficult to clean up, the bane of directors for over 80 years) -the apps
first develop by Neuronaoutis were optioned to parasol pictures to help emerging actors and actresses hit their mark
and know their lines

fer instance.
to make it simple -fied- for you
un -familiar with the notion of steering a Proxy..
hmmmm
you ever tried flying one of those toy helicopters at the mall?
those remote control helicopters you buy your nephew for Xmas
that they get excited about
until they smash into a tree enough times that it becomes "unfly-able

well
it's the same
with apps
and the mentoring
of
starlets..and whatever one calls a man who chooses to be an actor..besides ,I don't know-a fag?

starlet does this enough times
she not only can cost the production hundreds of thousands but alienate her from the crew..and eventually her "family" of cast mates
nobody enjoys working with a hack no matter how big her rack is

of course initially the young lady or young "man"
(if one considers a man who "acts" a man at all)
is resistant to intraneural "coaching"
especially the "girls"
you know how 18 year old gals can be about "having a mind" of their own
privacy..and all that
as if their interior monologue was some precious secret island..

"yes Hon," an experienced Change Agent might have to tell the procurement
over and over ,tenderly explaining that Direct Neural interface is "a good thing' and the mind reading part.
well hon-
it's simply a necessity for the Impart technology to work
Impart technology hon, so you can know which camera to look at..where to stand.
.trust me,no offense Hon
.nobody wants to "know you" that well,
your thoughts..while read ..are your own bizness
,it's about the acting,the technicalities Babe
..your physicality
and ..in no way would we interfere with that lovely inner spirit of yours
that reads so beautifully on screen

oh the tears.
the runny nose...
as Kimmie Backeraker cries to her mother about "mind control " and shit like Human rights
" buring her face in the rainbows and flying unicorns of her pillow,,

you have an idea
than what
i have to put up with getting these kids apped up
and it's quite simple.
no studio that is worth performing for now hires an actor who hasn't be "imbued"

Think of the nano particles as braces
as training wheels

Donna Baker and Steven Baker,Kimmie's parents ,Kim being under age.must consent to "the Process"
and these parents can be as difficult or moreso than than the actors.

I take the high road
explaining the wonders of the technology..at first ,trying to engage Donna Baker.just to get an idea of ..where she's coming from regarding the hesistancy of Apping up her kid for the movies,talking about how the nano is smaller than dust particles yet can contain over 250 components that selectively bind to specific neurons to help Kimmie See and Hear The New Way
than the low road..that nobody will want to work with Kimmie if she isn't apped,everybody has it done..
you don't want Kimmie to start off in this business as Kimmie" I'm too Good For "IT" "do ya?