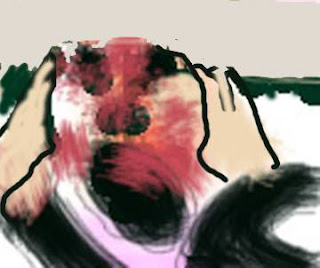 "Could Facebook one day be Brainbook? "Mark Zuckerberg said in a recent Q&A and ," that he predicts people will send thoughts and experiences to each other as easily as people text and email today". This" fanciful idea" of brain-to-brain communication is currently what over on hundred thousands of Targeted Individuals being used for as 'research and development/human guinea pigs "literally cry for HELP about every day online and off and to congressman ,reporters etc ..ofte...n before they commit suicide or in some cases homicide

DARPA , the NSA and scores of groups and or private security/ "org" have been permitted to 'test' the" fanciful idea" of what Zuckerberg is quite careful not express as- synthetic telepathy.
Soon Zuckerberg's" fanciful notions" of Brain to Brain Interface might become a consumer "must have" (the bugs have been put into some of us to "get the bugs out") but certainly not before various three letter agencies "test the technology as a weapon against "the ever present ENDLESSLY instigated enemy on a rather large cross demographic known as Targeted Individuals These agencies now large enough to BE political change agents in themselves know (and have known this - since most of these agencies were created) that "the true enemy" is WITHIN and that Brain Computer Interface /A.I. and the VR laid direct upon one's temporal lobe is NO game but rather one of the most dangerous hand's off weapon EVER created.
The ludicrous way that Hollywood deliberately "swings" the topic of brain to brain communication negates the rather obvious implications of somebody using Mind Reading Technology to judge- whom amongst us THINKS RIGHT or whom amongst us THINKS WRONG.
While most people (at least OUTLOUD ) no longer RATE another person based upon a person's ethnicity, creed ,sexual preference -can this be said of rating another based on other qualities less Eugenic in style? One's thoughts and "thought style" for instance.
.And do we REALLY want a man who created Facebook initially ONLY to RATE a persons appearance (their face)
thus humiliating one's whose face PUBLICLY was SCORED by others having anything whatsoever to do with reading nor rating our minds?
On Tuesday (June 30 2015) Facebook CEO Zuckerberg said ,"One day, I believe we'll be able to send full rich thoughts to each other directly using technology. You'll just be able to think of something and your friends will immediately be able to experience it too if you'd like. This would be the ultimate communication technology."
Zuckerberg continued, "We used to just share in text, and now we post mainly with photos. In the future video will be even more important than photos. After that, immersive experiences like VR [virtual reality] will become the norm. And after that, we'll have the power to share our full sensory and emotional experience with people whenever we'd like."-Jim Bloom
Posted by vvvvv at 8:21 AM