Evan had come early to the boardroom .So tired of being called to task for being late and was rather angry that the others had come on time so his punctuality could not be considered by Valerie Prentis by even one empty chair.To make up for this Evan decided to put his head down on the desk to convey to Valerie that he had been so early to "this time be on time" that he had grown so weary and tired of waiting for others he had nodded off. Evan did not realize he had actually gone to sleep until he heard felt a hand upon his shoulder and next the sound of laughing and giggling from "The Team" around the table .

The hand upon his shoulder shaking him awake was Valerie saying ,as Evan repositioned himself to upright "This topic today should interest you Evan as it deals with what seems to your  forte' in Brain Computer Interface -destroying one's ward before the ward has been used for all he or she is worth as functioning Human Organism..."

Valerie went to the head of the boardroom table.
Valerie acted as if she was "born to be head of the table"
Evan tried to smile ,trying not to  his disgust at those who were still giggling by joining in on the joke.
Was it his fault, Evan thought that THEY gave him the human subjects RUINER in their thought styles to such a degree that he, son of Gary Rainy ,knew more than anyone that a RUINER offered nothing to the Neural Highway worth studying.
That his father had literally written the book on the Enway.
The fact that any pertinent  neural data concerning even the most  basic left right hemisphere evoked potentials when screwing in a light bulb should be collected on "The way" RUINER minds and limbic systems worked was NOT for study except as means to READ RUINER like Brain Maps to identify RUINERS with the most rudimentary  scanning equipment .WHY it was his job to understand RUINER thinking when according to his father ,the father of the Neuronautics Movement and author of "Inway to the Enway" the point of any and all See Meters of All Kinds was to SEEK Abberants Amongst Us ...
Although at first Gary Rainy believed "this type" COULD be fixed with enough Mentoring
Evan believed it was "understood" that "this type" was more often than not UNRESOLVABLE and therefore REMOVE-ABLE.

As if reading his mind Valerie spoke ,"Some Tele-Operators feel it is their job to destroy their ward rather than acquire as much of their Neural Activity as possible that has nothing to do with the subject being RUINER or not.....Some Operating Tele-Operators ,some OTs believe they are doing the world a favor getting the RUINERS out of the way rather than using their Human Organism as slave labor. As means of Mine Mining exercises. SOME OF US here at this very table ," Valerie said looking at Evan "Get so impatient with Proxy they would get their Man-ed Man to SHOOT THEMSELVES! rather than discombobulate them enough to kill OTHERS! Never mind that this so called random shooting is for the greater good to initiate new laws and whatnot to make it more difficult for a person  to eventually be able to  buy so much as a steak knife without a license and a background check."

Evan began to stand up ,he would not take this ,Evan thought when he heard Valerie 's tone of voice change

"BUT! This is understandable. THIS is fact shows that some of us here might just be more progressive in our beliefs. Looking to far ahead .Being more far sighted in our eventual goals than the day and day outs of simple mind uploading and Psychotronic Threshold Testing...."

Evan sat down this time feeling Valerie's hand touching his shoulder not pride not provocation .The very fact that Valerie had walked away from the head of the table to be this openly demonstrative was proof to all those who giggled at him for having a tendency to RUIN the RUINERS despite whatever neural data they might transmit for consumer algorithm was NOT because he was irresponsible but because in fact his Ethics as a Neuronaut and believer in The New Way meant more to him than money or  P300 signal quantifiers . 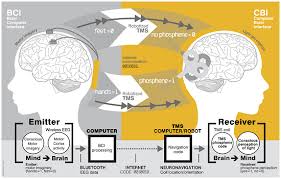 "The Husks.
the Proxy....the subjects inevitably become of less and less use..RUINERS one and all!.RUINERS trying to destroy a pure read .
Running to some damn shrink when they were told  the shrinks were ONLY for alibi
so WE can continue un abated without some Big Brother peaking in
some damn Social Worker types making sure ONLY the LEAST invasive Mind Studies are done

The Proxy want timidity
they want "a say" in Neural Monitoring
they want some damn senator or congressman to say STOP
some damn Woodward Bernstein to expose Human Testing with Neurotechnology
I like Evan would like to see this "Type" hanging from an overpass by their necks during  5 O 'Clock Rush Hour!
Doesn't it say a lot about the robust-ness of a society
when a percentage of the society being given the OPPURTUNITY! to create a New Language of Communication that does not rely upon the self censor of spoken  WORDS
that all but incite LIP SERVICE!

One really does have to wonder  as Evan Rainy and of course Gary Rainy! WHAT people who are against Mind Reading are HIDING!

THUS TYPE!
This NON ROBUST type given the opportunity to fine tune A Whole New World in the Making
deliberately runs away from Deep Learning and Tele-Presence!
THIS TYPE is the TYPE who would HEAR and SEE The Burning Bush of Biblical times
and RUN FOR A  BUCKET OF WATER TO SPILL ON IT !
and Spill on IT they do
Those made participants! who want a Power Greater than Themselves STOPPED!
the nerve of these people granted the chance to be OPEN MINED and Operant Conditioned
with a Higher Power
who gives a damn if this power is an artificial intelligence
it IS still MORE than the sum of one little man or woman
outsourced to commune with it.

I am often asked by IS IT THE Operating Tele-Presence fault this human organism or that one jumped in front of a train?
Is it the OT's fault so many of our resources get hooked on Benzodiazepine ,Neuroleptics,Lithium ,Tegritol ,"Valerie said ," to try to get away from the big bad voices...the big bad visions.
OR
are those who RUN AWAY from a Intra-Neural interface
at fault ...
are those who cannot deal with a genuine Brain Computer Interface like Gary Rainy believed RUINERS
....
I will speak no more of this," Valerie said," I do not want any of you interfacing certain aspects of RUINERISM into your Mind to Mind graphing
Our job is to Keep them Going
after all
NOT terrorize them EXCEPT when this terror is commissioned for studies involved with Fear

.Quite conversely Our Job is to  convince the damn human test subjects that they are "going through this" for a REASON..
.for their country...
.for The Lord!
for some Alien 'Hello Earthling" experience
for Locked -In Syndrome
for coma victims
For "The End of Death"
For Life everlasting!


...after awhile  even our most patient and plot driven Operating Tele-Presence  run out of Impetuous...the human subject ," Valerie says," feels used...of course the RUINER types do all they can to RUIN the Project

They run to a shrink ..they begin taking various drug cocktails to make  their minds get more and more  dull-ed
WHY? They know damn well they're NOT psychotic
they know damn well they are not schizophrenic
WE SPENTS hours weeks months EXPLAINING to them The New Way of Wordless
how important this testing is...
haven't we?

Why does the participant deliberately destroy their own brain
so their interface is muddy and meaningless?
Why does one cut off their own nose to spite their face ?
Is it human nature for people to be so selfish....EVEN if these people CHOOSE to think of themselves as HUMAN TEST SUBJECTS.
What was Jesus? Or Moses? or Adam and Eve BUT Human Test Subjects..
Try to explain that to a participant in a Brain Computer Interface and what do you get?

The participants MAKE themselves subjects at this point don't they?

The participants we spent months breaking in with elaborate interfaces of us being Space Aliens ,Angels   ecetera!

They can care less..
Now
You see?
They have WISED UP you see...
well what happened to Adam and Eve when they WISED UP?
Exactly .
Why are the participants TOLD NOT to LOOK UP information about Neurotechnology ? Because IT WILL RUIN THE EXPERINCE
we tell them
we beg them!
explaining trying to UNDERSTAND how a television works ! while watching television!
Trying to understand Brain Computer Interface  while Brain Computer Interface is being developed we explain is EVEN WORSE ...
WHY? because it destroys the FUN! for the person or persons you are thinking toward
to ROLE PLAY
and discover how this technology might work upon an entire population who don't believe this technology exists!
Posted by vvvvv at 4:49 AM