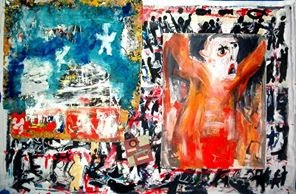 I tell Biff, " when gunpowder was first created
those in possession of the new toy that was a gun ..aware that the enemy did not know what a gun was ..or what  a gun could do... would shoot
a rabbit in front of "the enemy" before aiming the weapon at them .////////

the use of targeted individuals///////especially those who might seem "worthy" of such targeting were often created  and built up to be such rabbits ....

fear first and foremost  in the narrative and the needed obfuscation of fact ..i.e metaphor .. the writing cannot not be casual but constant ..as if the person writing of their psychotronic torture could not stand to be "alone" with their own thoughts ...important that the writer have a "signature" like voice .. prove the 'work' was not written 'for him'..

I explain to Biff that Tim Tucker ,who wrote the play 'Building 17" had a little help with the writing of the script
from the Word on High that is Voice to Skull

Oh did you hear about Tim Tucker? the guy who wrote 'Building 17" a few years back?
never wrote another play  since..went off his nut I heard..talks now only ..microwave weapons ...hearing and seeing things...extreme low frequency weapons...Yeah you know the type...

-most do ya' know
they hear a voice ...they put on a coat  and go to a infirmary room
doc asks some questions-
guy answers-
no I didn't take any drug ...
maybe there was something in the new carpet I bought ..some chemical...Doc?

'Any undue stress at the workplace?' the doctor might ask ,"Stress at home?"

guy shakes his head doc writes a script'...saying "These things happen...the wonders ..the mysteries of the mind .."
and that's it ..
'come back if these pills don't work

And that's it Biff..
that's the beginning and end of it

But those who do the "Hello Earthling'
usually know damn well
and well in advance the type who is gonna say "They Chose Me ,me ,me ,me '

what type of narcissistic ,arrogant piece of human ectoplasm feels out of billions of people in the God Damn world some fukin' sentinet being technological or supernatural gonna start telepathizing with them except a person who very much deserves to be part of human experiments huh Biff?

"You tell me Biff ..if you were a dude sending Voice to Skull data to some one's noggin and saw them acting like they be some chosen person ..thrilled to the damn gills your -specialness -done be recognized -finally ...what you gonna think of that guy...that he deserves Phase 2...of the testing "apps' to allow the dude to be Open Minded..
after all the dude was pretty damn open minded to the Voice to Skull..meaning of course he wants to be able to "talk back/think back' to whoever sent the silent sound ..most of these TIs if you ask me asked to be targeted.."

'Where do you get your information about this stuff Marcus ?" Biff asked

"Where do I get my what Biff?..I can't tell you .This is classified sh*t ..is there a little bit of speculation in my trying to explain to you some of this" information "as you call it I am trying to share with you ..why of course there is ...but if you're going to sit here and challenge me the rest of the night ..and confront me like some kind of Ruiner might I guess I'll just leave with my information right now ..and we can let someone else take care of Tim Tucker ."

"Maybe -at the time -he didn't know the "Voice' he heard was technological in origin
but he did know it wasn't exactly singing him no Star Bangled Banter.
-you see Biff
the way Mandlers see it
-even if the theme of "Building 17" was  sung by a burning bush- a decent person would know to leave it  alone not run with it ..not write it down.....no, there was no way Tim could have known the Voice to Skull was a behavioral test as part of some program  oooh they'd say anything to keep him coming back
and yes the imbue of the script was indeed meant to tantalize
but should certain topics be discussed
let alone fleshed out
especially if the topic can  be molded to sway another's very beliefs in things such as buildings
talk about mind manipulation
why would Tim Tucker want to sway another
with "Building 17"