i slept that night on Kurt and Jessica's couch.
The next morning I could barely wake up
.If i didn't know any better
I would have sworn i was "given something"
i could barely move my arms or legs
.I couldn't have had more than a half a cup of wine the night before

i heard Jessica close a door and heard her slippers entering the family room
she was yawning ,in her dressing gown
she must have seen i was awake and must have somehow sensed i wasn't well
as she touched her palm to my  forehead and left it there as if sensing my temperature
"ah poor baby" she said ,"looks like someone has a boo-boo in their tummy.."

Jessica  had  told me last night  she was the early riser "in the family" for she "to set up the little school  for Neuronauts" which was temporarily  in the basement ...

"the boo-boo" wasn't so much in my stomach  I wanted to tell her but all over my body .
Jessica grabbed a set of blankets from the closet and placed them on top of me
.I didn't tell her I was burning up ,not cold,as she began swaddling the blanket around me making me turn this way and back

I realized she was practicing the "swaddle " technique they sometimes used in Level One
for   RE ADAPTIVE REGRESSION and to sooth our "infant souls"
I wasn't soothed though more like bound like a mummy almost..but I was too tired and too sick to say anything
especially because she had taken so much time to "tuck me in " like that

Jessica  disappeared into the kitchen and eventually came back to the couch with a glass and a big jug of Hi -C disappearing once again into her bedroom.

She must have known I couldn't get to the glass or the Hi-C
as my arms were "stuck " in the swaddle..

I waited for her to come back and help me sip.
.I was thirsty ,hot and miserable.. hot as I was
my head felt like a "brain freeze" like you get  from eating ice cream too fast
but this "freeze" didn't wear off.

Now dressed in her professional clothes,her teaching clothes,although obviously in a rush ,she took time to tilt my head "up" and let me sip 2 whole cups of the juice .She took a napkin and swabbed a little at my mouth"it looks like your wearing lipstick" she said about the Hi-C stain on my lips,when the doorbell rang and the first of several small and not so small children ,obviously dropped off by their parent began ringing the doorbell..Jessica laid my head gently back on the pillow ,"Duty Calls,"she said

a swirl of bright coats entered the family room single
not noticing me .
the kids .
the student making a bee line to down to the basement /school room
Jessica and kurt showed me the half finished basement last night
a washer and dryer
a ping pong table which served as the art room.

according to Jessica "The Motherment" had closed The New Way School in Silverlake(temporally)
black mold was found in behind some of the sheetrock .
Kurt said the mysterious mold was probably "placed' there by Ruiners.
Like most Neuronauts ,the children of The New Way didn't go to regular schools
and The state was OK with this ,"though they made it very very difficult<" according to Jessica,who was licenced to do home schooling..HER way .The New Way so long as a "light load" of crammer ,math and social studies etc was introduced into the semester.
Mainly the children kept away from "regular ' school studied GR's early lecture's on "how to Be" from video tapes and GR's books.
Also alot of what Jessica called Three Dimensional Thought Instructives
so they would not have to undo the rash of words that RUINERS placed into young minds..using clay,Dixie cups,balsam wood helped the children how to think beyond words but in pictures.

"Another Woman named  Donna ,a Neuronaut who used to teach in so called "regular" school helped out," Jessica had said the previous night ..
I supposed amongst the small jacketed kids that had entered the family room to get to the basement ..Donna must have come in a s well,I was so tired and so wide awake and so sick I barely noticed what was going on around me..I tried to get back to sleep but the sound of the children moving chairs kept me from doing so..

Jessica caring a stack of books set them aside on the coffee table and put the back of her hand to my forehead,when not giving me sips of Hi -C..She looked at me smiling.."a little better.."she said I guess referring to my forehead..sorry i am so rushed ..try to sleep it off.Kurt has off today and he likes to sleep late but i am sure when he wakes up he can drop me off either at the gym ,the waxing place or The King's Cross.May i suggest we get rid off that unibrow first? I already placed a call to a very good friend of mine who is superb with men..alright,..alright <"she said again although I had not answered.."So we can see how good you clean up huh?" She kissed my cheek and picked up her books from the coffee table .Opening the basement door ,she said

"if you need anything just knock on the basement door,don't wake Kurt.."The door closed  behind her. I tried to get back to sleep,but everything seemed so loud..the muffled voice of Jessica teaching and the little sharp voices of the tiny voices of the kids answering back...going in and out of sleep..the sound of GR on the television downstairs..and suddenly I  hands cover my eyes. Kurt crouched behind the foot of the couch where my head lay.He lets go off my eyes and his face is above me,so close i feel his "five o'clock shadow"

"Morning Dumbo ,"he says ,the Listerine on his breath like cold vapor.

Kurt moves stands up and moves in front of the big set of shelving that houses the TV ,his back toward me,he is only wearing jockey shorts no robe no slippers.He pops on the TV and puts a video in..a nature film about Rams in the high mountains  . the narrator is speaking about the ram's horns..and how during mating season the rams push other rams off of the slippery mountains ...Kurt picks up a video camera and grabs a small tripod which he stretches to make taller .Next he puts the video camera on the tripod and faces the whole set up towards the couch. I see the red light go on indicated the camera is on.He has a big grin on his face  and he  he rubs his hands together ,pausing for a moment to watch a ram tumbling down the mountain

He goes behind the camera's eyepiece and makes some minor adjustments ,I hear the kids in the basement begin to sing, 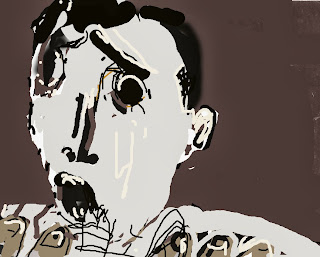 "wider,: he tells me,"and if you scream Dumbo .I'll cut your Big Fucking ears off."
Posted by vvvvv at 1:47 PM