as brutal as Evan can be he stays with me..
he's not fickle friend who doesn't wanna be seen with you if you're morphing
In the past coupla of years ,since evan "took me"
or borrowed me..
alot of my friends said so long psycho...

you talk about A.I and Human experiments too much
well the novelty of a "sick" friend wears off


i have heard there are parents like that as well
"it's all the drugs you took or take...
of course you hear voices and see things.." 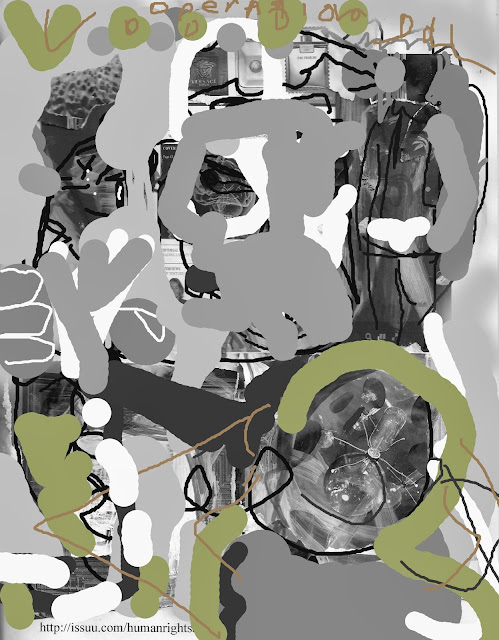 or outsourced to them

by the Powers that seize ya

any way it's all about the technology
not me

they have lists I am told ...of non person types
who can be parceled out

but it all goes in one ear and out the other

and our affect
brings out
a certain
cruelty in others

i was supposed to believe them in aliens one day
and...
and than angels

and than just angles
because
because because
it's none of your fuckin business Dumbo
you're a bad person
and we must track you.
Your paintings are sick.
You are a sicko
we don't believe in psychiatric diagnosis for you to run under its skirt

it's taking it's toll
to deal i do whatever drug ..goes with the rundown

it's all about terror now
you don't get sucked into the stories when ya know it's A.I

no stories no more
just kill yourself
...but it's like "kill yourself would be in a computer game..
or YOU're a dead Man
cuz thjey gotta protect their own self
when you're thinkin nasty shit ..either about yourself
some reaction to tv...
or hate of the intrusion which is not LIKE mind rape
But is MIND RAPE
but not so much now
all my secrets they know
all my ....Interior Monologue

weird that you get used to it..
but you don't

so hearing "you're a dead man" hundreds of times a day if your thinking something gross
like a pimple you had in highschool
every time I see an ad for some acne medicine ...

then them going all poundy on your mind
causes a complex..

i am not a likeable guy
except in small doses
i don't talk about anything but my own thoughts
i was diagnosed auitistic
and all such shit..

if i didnt have dystonia ...and all kinds of ,,
thinking about ,,,
things they don't wanna hear

it's the soundtrack i can't stand
but they do seem to know what they are
doing
it;s called psychic driving
the driving and synthesized telepathy
is to cause
The real thing

i have several teams ..or had several

i am almost happy-almost a happy man
thanks to them
i trash them
but
I understand it.
i no longer wish them ....bad vibrations

in fact I wish them well.

and these thoughts have not been swayed

Evan has ambitions
and has told me
or explained
in between promises that if i do not stop typing and drawing they will kill me
but he gets drunk and pops pills and suddenly
a chum
let's let our hair down
letting one's hairdown sounds gay i remenber thinking, as Evan has  taught me, all my thoughts
are gay thoughts

i cannot watch movies that are geared to women

he wants to make me a man

he finds another way of saying "lets let our hand down


gays are the sickest
people on earth
Disney said so...Stalin said so.Your father probably thinks so .
in fact i know he does he told me to do thistoyoukillyourselfbeforewedo
nobody wants fags .or mental patient druggies around anymore
and This is How we do it.
hands off