The money new cohorts brought in was used to buy more advertising and print leaflets and to purchase real estate so Neuronautics could open annexes across the country run by accredited Neoronautic "Mentors" who had completed the program..

as the "neural read" would indicate beyond a doubt who amongst us was‘good" and who was "bad".

There was the obvious Op Ed response that only G-d could truly decide who was Good or Bad and more press that insinuated that Gary Rainy was a fraud ,a monster and all matter of charlatan.

.If nothing else the debates about Neuronautic’s "worth" as a "movement" only heightened it’s membership especially amongst those who believed "some People" were indeed Less than Others.

.Not everyone ,Gary claimed was a Neuronaut,in fact there were whisperings that Gary kept a list of those who had "failed "at " Beinghood" and the benefits even Mentored "lifestyle" might provide.

(although those who science indicated were Unresolvable were not removed from the program ,as Gary decided that Mentors must "keep an eye " on them,,,,and quite possibly Resolve them
however
it was always

the initial
SEE METER results that Gary
and a ‘subject’s" Mentors turned to
as if a permanent record ...of one’s TruGenic nature

all Mentors and all prospective Mentees were strictly forbidden to mention outside the confines of their " annex"..

The Pinky Ring,a reimagining and more powerful and portable See Meter   .. promised an even more distinct measure of "selfhood"
as the thimble sized "marvel of Measured Mindfulness" contained not simply heat sensors but small electrodes that collected an EEG -like scrawled "print out"
of one’s "Neural Accountability" that could be read and all but deciphered by those in "program" that had passed Level 5 " Beyond Beinghood" courses..

‘what looks like simple up and down  squiggly lines based on the measure electric currency of one who has been " read"
...can actually be a pretty good blueprint of the state and the "rightness" of a subject’s mind
IF READ the signals are deconstructed  by TEAMS who have attained INSIGHT INTEROGATIVE lessons  or what I call PSI ABILIFICATIONs that let them KNOW without KNOWING a persons' inner AMPLITUDINALS."

Many scientists and those in the medical field wrote significant pieces in many  of the same periodicals  that had Gary Rainy had when discussing the PINKY RING as The New X Ray of the Soul of Man against Gary's technological "breakthrough" stating that  EEG reading ,ley alone one garnered by electrodes on one's pinky  indicated "not much of anything" relating to  consistencies and idiosyncrasy of brain function that has absolutely nothing whatsoever to do with verbal or subvocal response"

One might think that the negative press Gary received and  the denouncement of many scientists who were once "for" The New Way might have hindered Neuronautic's increasing membership
but  the very fact that Gary had declared "a war" on "Intellectual Ingrates who have somehow weaved their way into the fraying fray of this country" only made Neuronautics more attractive to those also against" Intellectual Ingrates and all that those
"smarty pants- I wear  glasses ..I read books Types" TAKE from
the INWAY to The ENWAY" 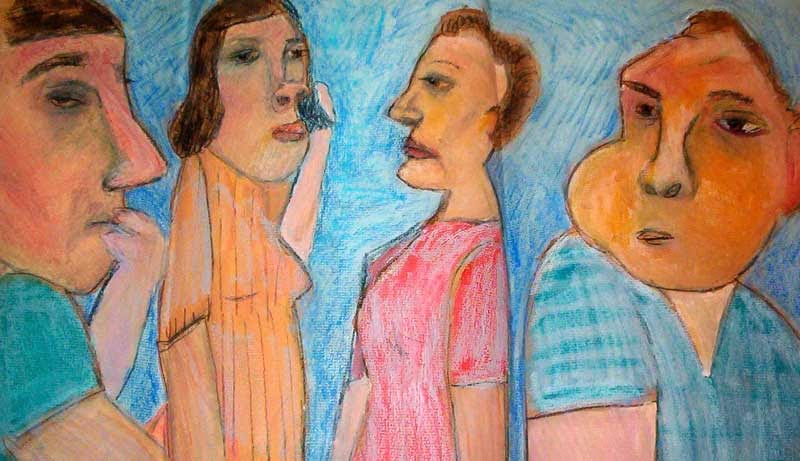 "this.
an example of a TYPE D "
on the "Scale of Beingness"..according to  an  INSIGHT INTERROGATIVE" Captain"

Gary said in time with the slide presentation
of so called "art"
that Gary felt suited the "example of Inside Mindedness" better than
mere Neural reads
as ART is very much a signature of one's INNER STATE OF BEINGNESS
and was actually
part of the initial processing by Mentors
who asked a "subject" to draw
a. a crowd
b. a leader in a crowd
and
c' YOU being lead by a leader
Posted by vvvvv at 12:35 PM