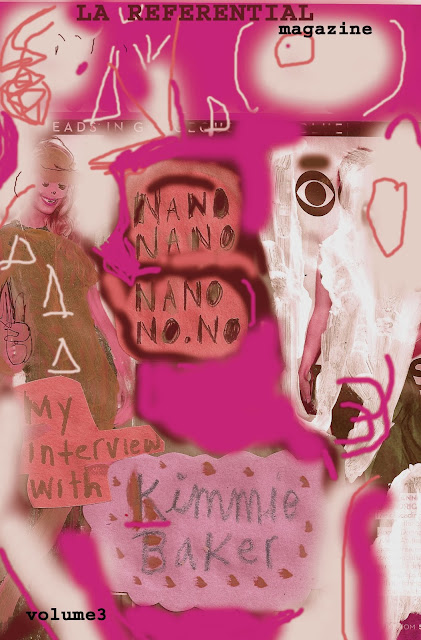 Kimmie Baker ,17 is trading in the small screen for the big screen in Parasol Pictures adaptation of "Let Them In"a controversial book  due to some people's claims that it is really about The New Way and encourages it's young adut audience to think in "the New Way"that bases it's ideolology on Science-ideology ,Gary Rainy and detractors say the Eugenics (or what THEY call truGenic's "some people ,some people's minds are Right Thinking Minds and Some people 's Minds literally are Ruinerous Minds(Gary Rainy ,founder of the Neuronautics Movement or Religion in the 1960's foresaw "mindreading technology "and wrote many gooks  and thesises  on "How To Be Based on Empirical Science including "inway to the Enway" (1968) that concludes that Ruiner(bad people,including sociopaths,drug addicts,mental defects of a certain type("sickos ,he calls them ,as The New Way believes Psychiatry and Psychiatric labels are veils for intrinsic "badness") and states that Ruiners main purpose on Earth is to emit their neural sicknesses upon others...

"Let Them In" ,some say is about enhanced existance through "divine technologies " parlayed to Gary Rainy ("Above the Enway" (1970) by  what Rainy simply calls an "Entity" from another "plane of existence" who  gave Gary and He alone access to what some claim is simply nanotechnology capable of  imbuing another with Immersive Reality Adaptations and "implants' for Direct and Brain Computer Interface..

regarless of the controversy "Let Them In" scored  big amongst it's targeted Young Adult audience .Parents groups across the nation asked that Proxy Publishing ban the novel or at least warn the public that the theme of "Let Them In" is based on the teachings of Gary Rainy and The New Way which these parents is claim is a cult.These Parents Groups and others claim the novel and now the movie encourages "mentored living" and the fantasy element of the heroine interacting with a guide that only she  and she alone can see or hear all but celebrates exclusive nano enhancement.

Kimmie Baker plays Marla Kendricks, a 15 year old girl who is orphaned in life when both her parents die in a car accident. Marla is sent to live with a mean aunt who she runs away from only to be kidnapped by what first appears to be a cat of some kind and is later revealed to be a band of magical real life angels that cast a spell upon the orphan so that she will always feel protected, loved and nurtured. All Marla must "do" to pay back the angels is spread "the spell" that enables Marla to see and hear the angels. Marla is told that her mean aunt will turn loving if Marla slips some magic rain drops into her drink. That will enable her wicked aunt to also feel the angels nurturing though strict love.
KB:     It's a wonderful film about spiritual and transcendence

GB:   But some people say Kimmie  it's also a film  about nano chips and  human enhancment ..specifically when it comes to communication and seeing and hearing things only an exclusive portion of society can


KB:   These people say anything. They know I'm New Way and they think every film might appear in the New Way.


"GB  :In The movie both Marla and her Aunt change not from within but from  being fed or "tagged" with  microscopic ,magical pellets that only the "angels" that help Marla (and The World ,if one is to presume correctly..)Numerous Parent Groups and Anti - Neuronautics Groups  point out that these magic "pellets" have an awful similarity to  the notorious microscopic "inserts"  Gary Rainy, founder of Neuromatics and the New Way ,recieved from  an intelligent Being from another world.Many believe these so called magical "inserts' or what Rainy has called "rain -drops" are actually a technology that helps a convert to this religion or movement communicate as if a Group Mind and that members of the New Way are initiated into the group by being  imbued with things called  nano particles that allow them to have direct neural interface with others "in the club"..Furthermore there is evidence that  the  brain waves and thought processes of its founder Gary Rainy were encoded and collected to be "broadcast" to The New Way's followers,so that they might truly be "more like him"in mind and spirit

KB:   Every religion, enemy movement has its share of urban legends. I know nothing about nano - what do you call them? Or any interfacing people. I like to make up stories. Was I initiated into the New Way? Yes. BUT If I see and hear things others do not it is because I was taught how to this through hard work."Let The In" is a wholesome ,uplifting ,beautiful movie
It's about  a lonely little girl without parents who is saved  by a little 2 inch princess ,a little angel names  Capri. Only Marla can hear or see  Capri who shows Marla  how to move on with her life, have gratitude and help others.

GB:  What about a the people who say it's about a "cult: who has gotten hold of mind augmenting technology that that can literally control another's  5 senses . And that once a person has had this done to them this person is all but owned by this group.
KB: Would it be a bad thing to be owned or guided by angel, or even groups ..real or imagined?