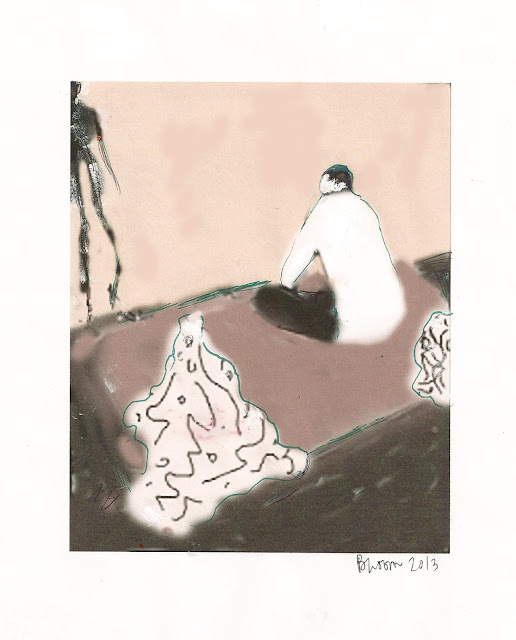 "Wouldn't it be fun
to be able to send another your dreams.
send "mind movies" * via headset to another person..,"Valerie Prentis said ,in an exaggerated kindergardern teacher way,holding up a child's drawing of a rainbow  and ponies ,ice cream and balloons,theatrically Valerie slowly ripped the drawing into pieces.
She had dozens of children's drawings just like that and always began training future Muralists with the same examples..
The Muralists were not like the Mentors chosen for their training in behavioral modification  or interrogation techniques.Auditors ,mainly.Financial and OTHERWISE
Most of the Muralists were chosen to participate "in the program" because they had criminal backrounds.Valerie loved  Muralists there was something almost sexual about sociopathology  The Jeff Cunanin intensity ,,the Linda Casabian glint in their eyes.

People who enjoyed hurting others were not as difficult to come by as one might think.Nor was it difficult getting many of the "artists" to work at minimal pay in return for reduced sentencing.The more violent offenders,murders and rapists often worked in their cells with only an Epoch or Emotive headset and beat up Mac without any pay whatsoever

I suppose one day virtual reality will be used for fun stuff like Gaming and having Tea time with  one's favorite aunt via headset.
..but the main goal
right here
right  now
is to learn  how to drive another either mad or to full submission with smoke and mirrors and the magic of Merge Bio Tech which just happens to be compatible with Merge  headsets that allowed a Operating Tele-Operator  (an OT) to direct and steer both a Brain Computer Interface and Direct Neural Interface


Sound and imagery was Valerie Prentice's specialty. as she was both  producer  and head of research and development for  Parasol Pictures new foray into  Immersive Tele-Perception,
Valerie explained  that -
A fear begins with
an idea
an idea begins
with an experience

the experience can  be second hand.
second generation
Valerie said..to the class.of wanna be  future muralists and Mandlers


If you graph a visual of cattle cars moving through a valley  to a Christian…they might think of the train  and the scenery as something pastoral
.now Valerie said if you send the exact same imagery to a Jew for instance .I guarantee quite a different neural spike..
now I want every one to take out their notebooks
This morning I emailed each of you a film clip.
a still.

with these headsets you will be able to alter the original still .
now i want you to imagine having the control
of another's eyes.another visual cortex which you will if you study the techniques both Figer and I will present to you in the next 30 weeks

we will work up to the headsets.
and painting with your brain
making murals with your mind

for now i simply want you to "rewrite" that still.
as something unpleasant.
and scary

*as Micromanipulation systems are  based on pure master/slave tele-operation techniques  and are capable of creating a complete over ride of another's 5 senses
Full Immersion Virtual Reality Interface (VR)  uses  aural as well as visual  feedback techniques
matching,
"note for note ' exactly what a   Proxy sees


Augmented Reality (AR) is based on mixture of  the
real environment, that the user senses combined with his or her  mentor 's optical
overlay
although this is only possible when the visual cortex has been stimulated ( or trained) enough  to  forged  a new  dendrite and synaptic tendancies which work in tandem with  specific nano particles created for this "New Way" of viewing the world
components "turn on and off "specific neurons sequence  themselves to one's  "mentor''s "script"
which the Proxy has  by now  parlayed "as his own"
if the Mentor has been diligent in his re adaptation (re-education).assuming the "Proxy" is at least somewhat open to the exchange that will  make tele-micromanipulation possible.. soon enough
the temporal lobe  can  suppose a state of ‘full immersion’
and "conglomerate" "the operator/mentor's identity,perceptions and will..
as the  successful  "pushing" based
micro/nano tele-manipulation continues  a "Proxy" may begin to  feel like a "human puppet" in spite of visual rewards and heightened 'state of being" and resists once again "control" often threatening self harm or inflicting self injury ..
Posted by vvvvv at 6:30 PM