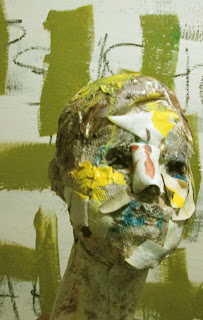 More and More Indis O’Say saw mind’s eye wise
less and less of his own life
as his life became smaller and smaller -more and more Indis O 'Say's mind was filled only with straight to cortex imagery
and the TV watching the BrainLink demanded to trigger his associative memory
for the tele- presence to eat.
So hungry was the BrainLink for Indis O Say's  pain and  misery
as to clone such neural firings to lay upon another
If Indis was younger it might have been sex or crime or rage they wanted for their files
At first it was only Indis' fear the brain computer interface wanted
but now it had found something better to upload
-the lack of will to exist at all.


Indis O 'Say forced himself out of the house daily making sure he shopped at the same stores those from Parasol Pictures shopped at .Those in charge of the Remote Neural Monitoring went easy on him if he sullied his reputation in front of his peers both online and off .The transmitted madness was meant to be vivid and all consuming .The come- uppance  of the silent ,unseen "God" was meant to project visually  -the disfigurement from the microwaves aimed at his facial nerves was deliberate
this  mask of  palsy like asymmetry and forced tightening of jaw and mouth  .
The directed energy  triggering calcium ions in his brain to incite an  almost comical  swelling of face  was not a side effect of the BrainLInk but carefully built into the steering itself.
Just incase  if one chose to veer to far off of the interface's track.
The circles under his eyes and stiffness of his gait from the psychophysics' augmenting of  dopamine flow made Indis look monstrous .But the disfigurement was temporary .Triggered remotely  only when Indis  was out  .

A make up woman from Parasol Pictures shopping for groceries in aisle 4 with her small child pointing at Indis giggling .It was their job to make such a fuss .Indis himself had done the same to others who went "Ruiner" on the Imbue-io System . The make up woman held up  her small child to have a look see and a laugh  at Indis   .The shaming Indis knew was part of the ritual of the Merge being used against another .It was meant to show  when one had been turned against the neurotech that ran this town.  Indis had heard that if one did their part being example  sometimes the punishment would end -never though would the brain link . According to Proxy Cyber if  he paraded himself in front of others for speaking against it  he was serving a function.Paying his dues for going  against "The New Way"

It was not only to serve a function  to Proxy Cyber that Indis' did his job "being an example of what happens for those who spoke against Direct Neural Interface,"Transhumanism" and progress but for the rewards that came from  the brain computer interface for doing so
One half hour of

Silence .
and -No visions for an hour or more.