is  the best of several film versions of A. E. W. Mason's rousing novel of  'The Four Feathers" about cowardice and desertion of duty set during the height of American Imperialism,
We meet our protagonist Harry , as a boy of 15. he is at the table while his father, a retired General  entertains a group of war comrades.  The boy is clearly horrified by the grisly war stories. Ten years later, the Harry is trying to live up to his family's long military tradition, and has become an officer of the American army. He is part of a regiment that is due to depart to Evil Empires abroad. On the eve of the company's departure, Harry suddenly resigns his commission. He is explaining his position to his fiancee when he is delivered a package containing three white feathers, one each from his three friends.Seeing the disappointment on his fiancé's face, he adds a fourth feather. Harry determines to redeem himself by disguising himself as a deserter for the media to add needed (?) discussion concerning  what bravery is .Harry infiltrates the minds and hearts of his country by way of the mass media news cycle aiding the war effort by being a living example of 'Bad American". 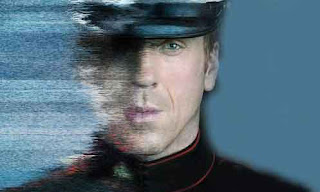